California’s Sierra Nevada conifer forests are bearing the brunt of the natural disasters that have plagued the state for more than a decade – historic drought and violent wildfires have killed 30 percent of the woodlands.

In addition to the overall decline, the team also found half of mature forest habitat and 85 percent of high density mature forests were either completely destroyed or transformed into low-density forests.

Areas with high initial canopy cover and without tall trees were most vulnerable to canopy cover declines, which the team believes explains the disproportionate declines of mature habitats.

The devastating numbers suggest the current conservation methods are not enough to battle mother nature and the researchers are urging wildlife officials to actively manage forests, instead of just identifying threatened regions. 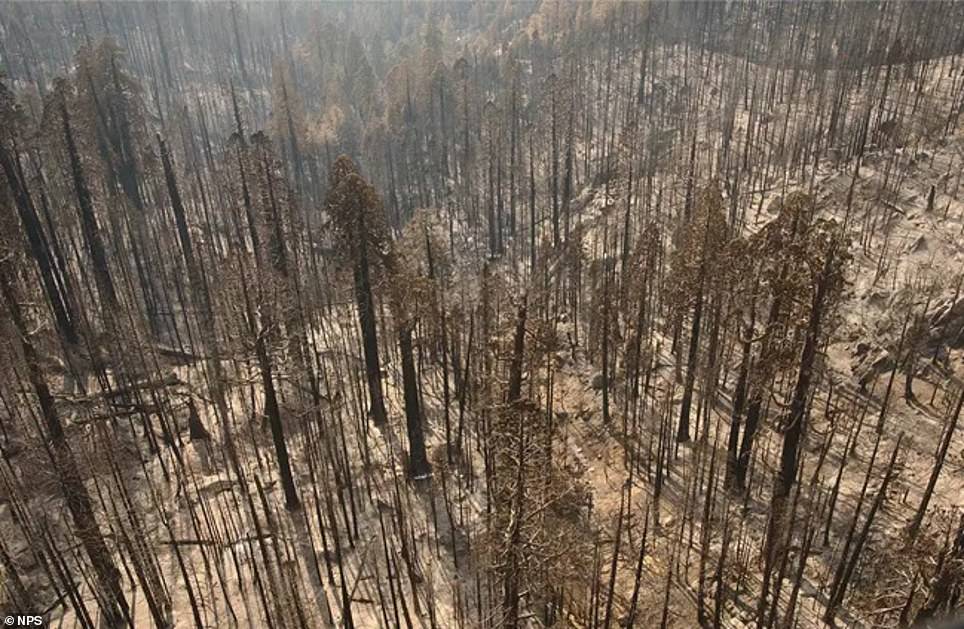 A study conducted by the University of California, Berkley, which evaluated declines in conifer forests that cover the Sierra Nevada. The results show a total of 30 percent of forest have been wiped out.  Pictured is an area called Homer’s Nose Grove where the fire burned with high severity, killing many trees

The Sierra Nevada region stretches across 27 million acres of land that is teeming with wildlife and a range of different types of trees, the Sacramento Bee reports.

‘These recent and increasingly extensive losses of mature forests threaten the persistence of wildlife species that require a mosaic of seral stages, including stands of large trees and multi-layered canopies, reads the study published in ESA journals.

The California spotted owl, which is endangered, is even more threatened because of the forest decline, along with logging that is adding to the destruction.

Then there are wildfires that are major players in wiping out the forests.

However, there are ‘good fires’ that are also necessary to helping large trees thrive – these blazes burn brush and smaller trees to make room for larger trees to expand. 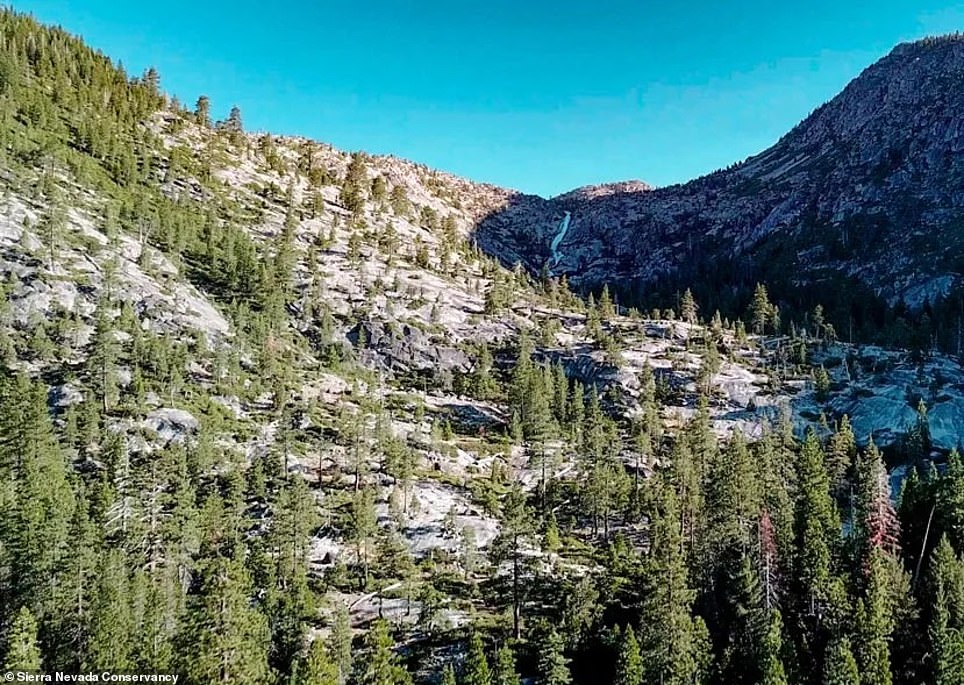 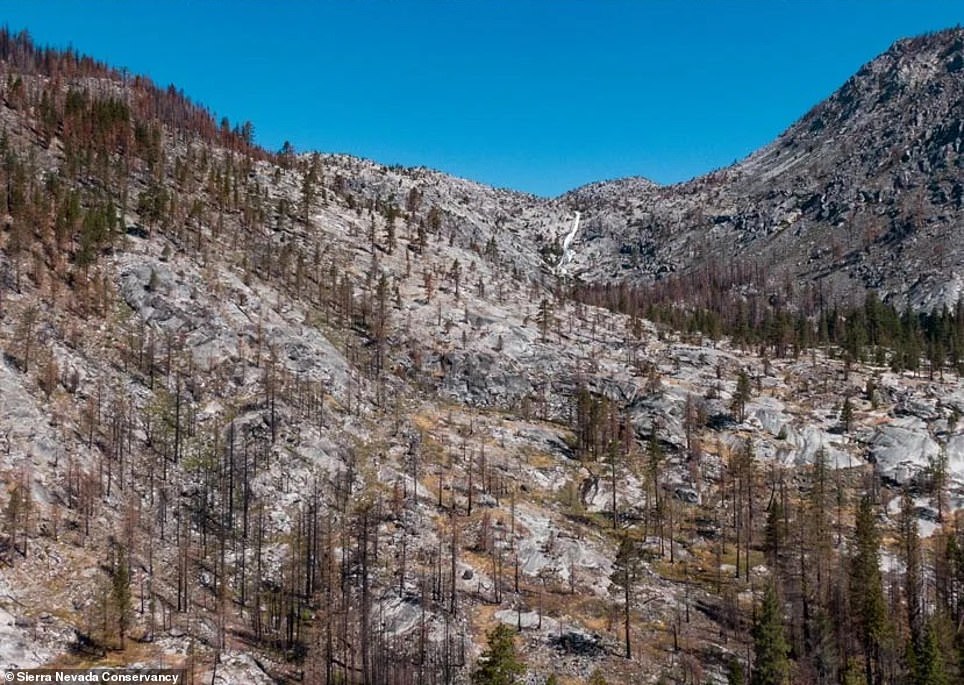 The Sierra Nevada Conservancy notes that the bad type of wildfires are bringing larger and more severely today than ever before. Such devastating fires include the 2021 Caldron Fire that scorched 221,835 acres in the Eldorado National Forest and other areas of the Sierra Nevada in El Dorado, Amador and Alpine County 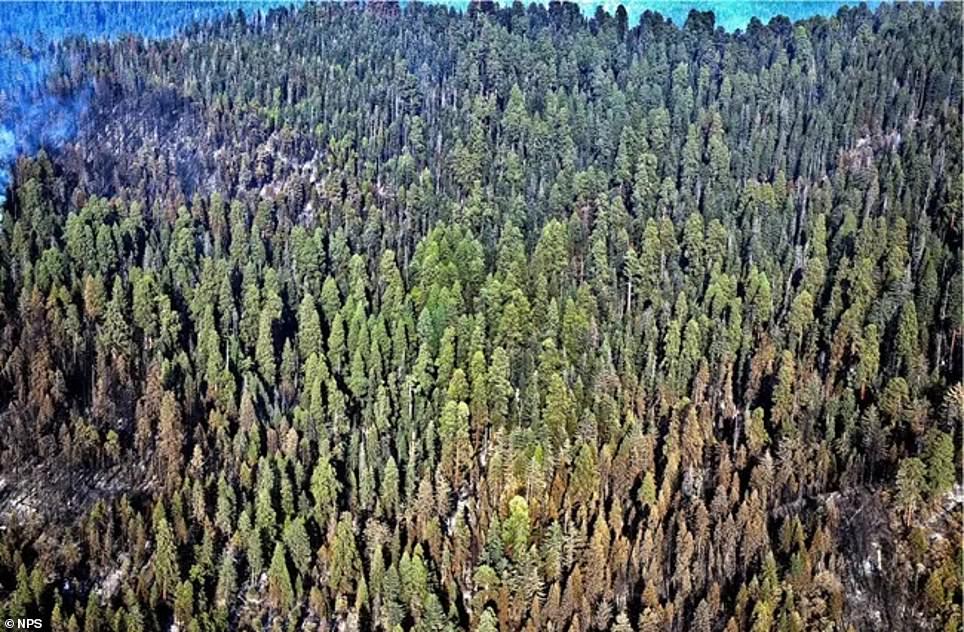 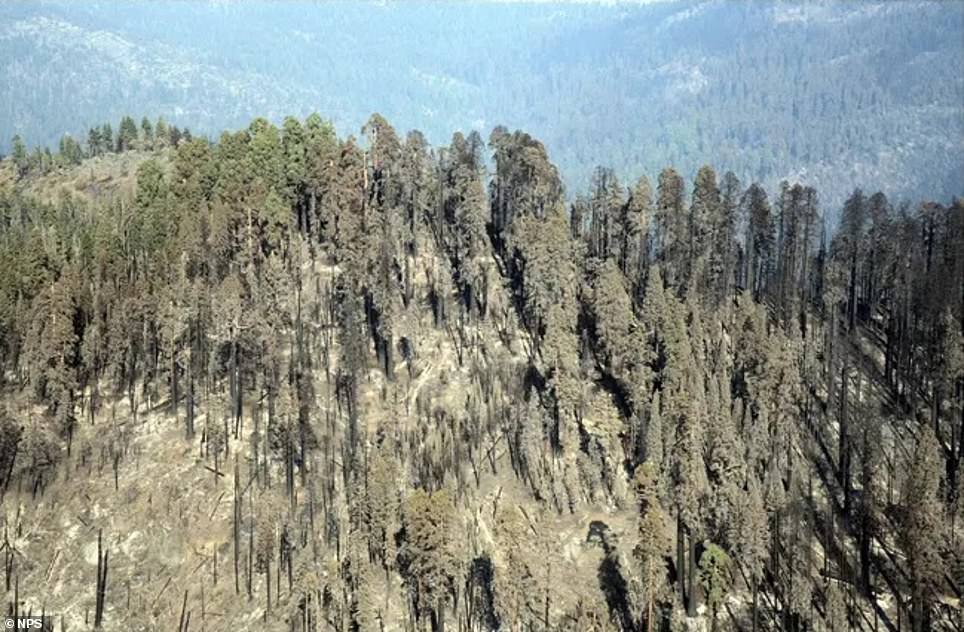 The Sierra Nevada Conservancy notes that the bad type of wildfires are bringing larger and more severely today than ever before.

Such devastating fires include the 2021 Caldron Fire that scorched 221,835 acres in the Eldorado National Forest and other areas of the Sierra Nevada in El Dorado, Amador and Alpine County.

Images show the path of destruction on several mountain sides including those near Pyramid Creek and Horsetail Falls and around highway 50 near Twin Bridges.

These regions once featured lush evergreens sprouting from the ground, but following Caldron fire the only thing visible is a barren landscape.

In 2020, Castle Fire ripped through Homer’s Nose Grove and destroyed more than 30 percent of the giant sequoias in its path.

A fire in 2015 was sparked when lighten hit the ground of Grant Grove, starting the Rough Fire that was three times more severe than previous blazes. 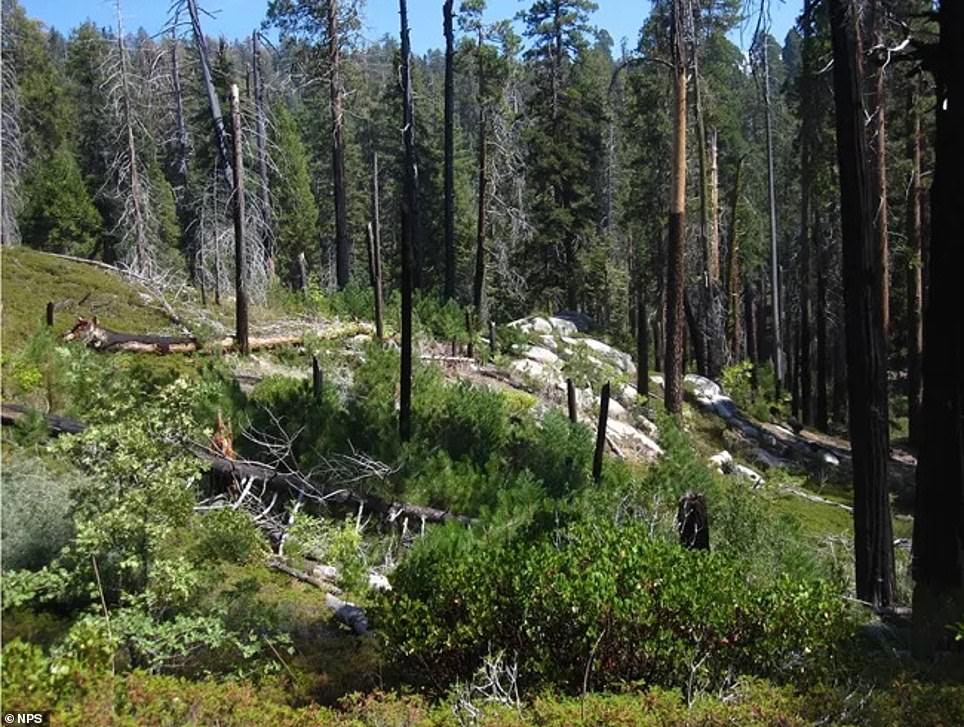 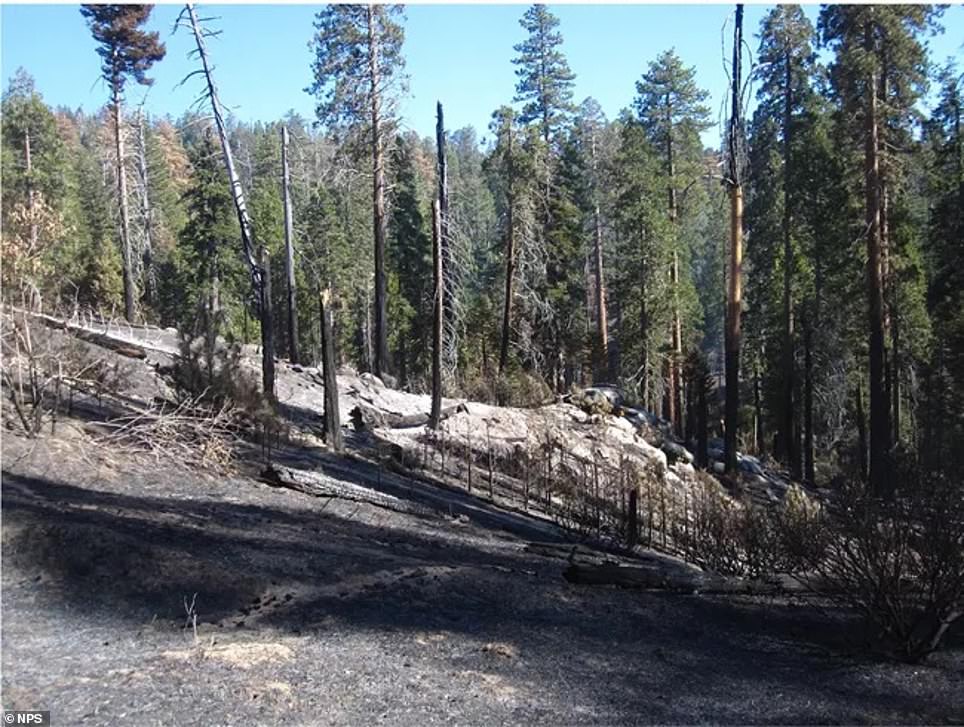 Areas with high initial canopy cover and without tall trees were most vulnerable to canopy cover declines, which the team believes explains the disproportionate declines of mature habitats. Pictured is Northwest area of Grant Grove in Kings Canyon National Park before and after it was burned in 2015 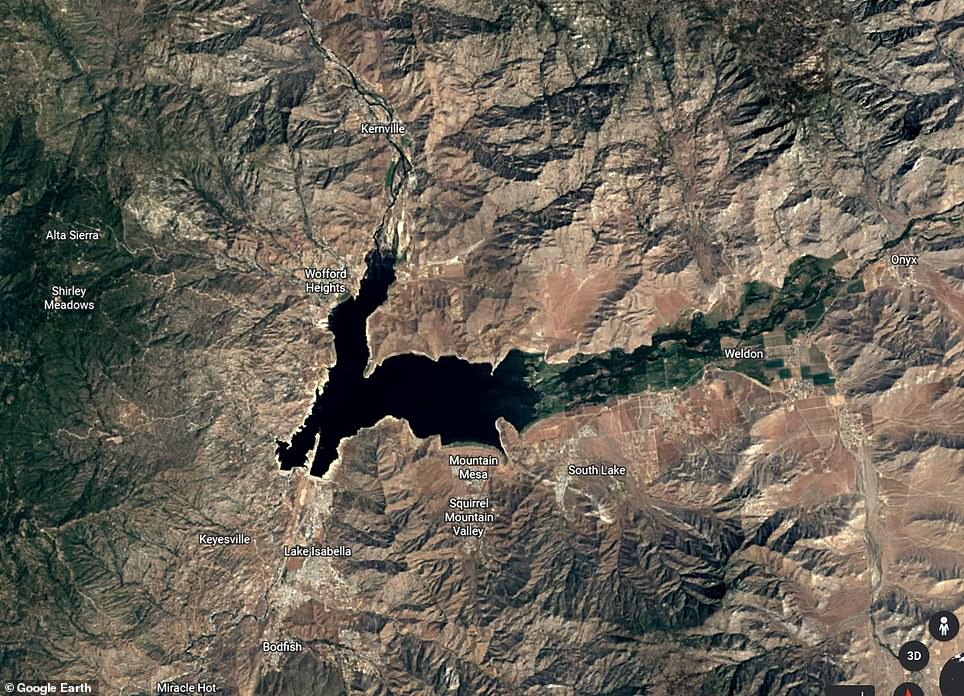 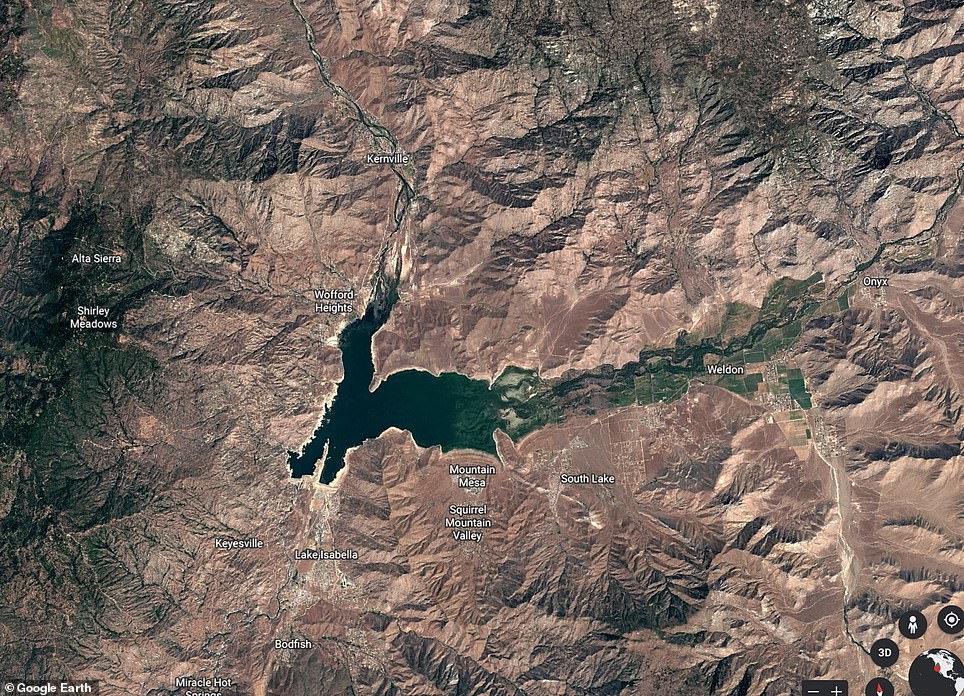 Drought is another culprit behind the conifer forest collapse. The left is a satellite image snapped in 2010, while the right is the same are in 2020. The most recent image shows a lack of water in the area and less denser forests to the left

‘Fires like the Dixie, Caldor, Creek, and North Complex have devastated communities and caused significant damage to the resources the region provides, including water, wildlife habitat, recreational access, and carbon storage,’ Sierra Nevada Conservancy shared in a statement.

‘Impacts from large, damaging wildfires in the Sierra are felt across the state as they degrade air quality, jeopardize the state water system, and offset progress towards California’s air quality and climate goals.’

The Sierra Nevada Region plays a critical role in California’s water system – more than 75 percent of the state’s residents get their drinking water from here.

Snowpack is vital for water storage, and Sierra forests and meadows play important roles in ensuring water quality and reliability.

However, The quantity and quality of water from Sierra Nevada headwaters is threatened by overcrowded forests, degraded meadows, and a changing climate.

They are less resilient to drought, beetle infestation, and wildfire. The result is unprecedented tree mortality in the Sierra Nevada—129 million killed by beetles and drought alone since 2010.

Forests of dead trees create numerous challenges for water management, from an increase in flooding and landslides to a reduction in water quality and reservoir capacity.