Henry announced that as of Tuesday, there are 7,580 active cases of COVID-19 in B.C. A record high of 373 people are in hospital, including 80 in intensive care.

Henry choked up when speaking about the 74 lives lost to COVID-19. Their deaths mean that so far, 882 British Columbians have died of the disease.

“Our condolences go out to all the families who are mourning their loss,” Henry said. “To the care providers and to our communities who have lost loved ones.

“We know that this is the most challenging time to deal with these issues. Not only because of COVID, but because of the time of year. We mourn with you and feel your loss intensely.”

Henry reported eight new outbreaks in the health-care system over the last weekend. There are 56 active outbreaks in long-term care and eight in acute care.

While daily case numbers are trending downwards, Henry said her worry is that the trend is in part due to people not getting tested as often during the holiday period as they were before.

No more signs of U.K. variant — so far

As health officials revealed this weekend, a Vancouver Island resident in mandatory 14-day quarantine after arriving home from the United Kingdom tested positive for a new variant of the novel coronavirus first detected in the U.K.

Henry said there was no evidence suggesting the new variant is more likely to cause severe illness, nor is there evidence to suggest approved vaccines for COVID-19 will be any less effective.

WATCH | Dr. Bonnie Henry talks about the person who tested positive for the U.K. coronavirus variant: 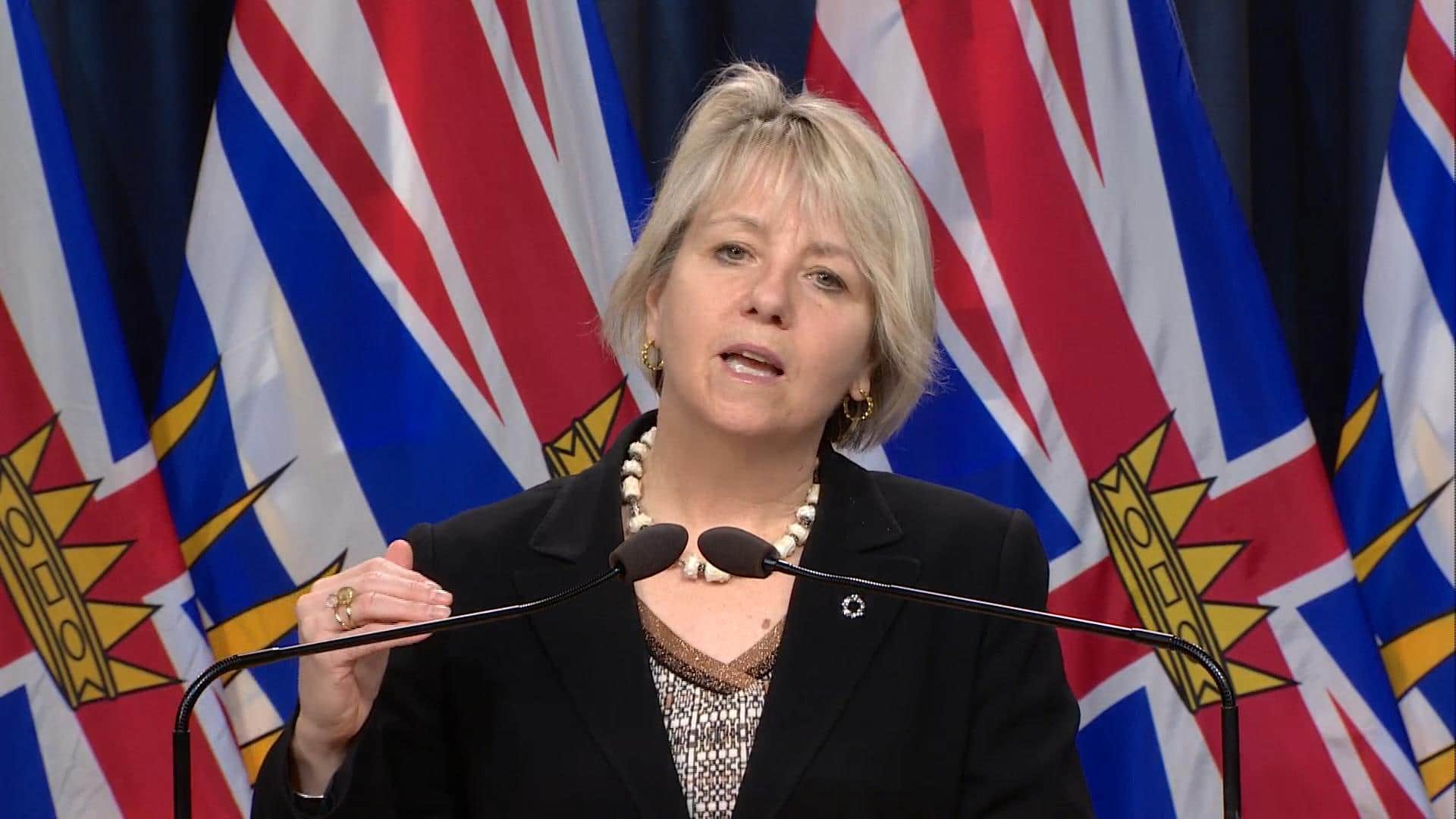 Dr. Bonnie Henry says the person who tested positive for the new COVID-19 variant was in quarantine after returning to B.C. from the U.K. 1:30

She said the B.C. Centre for Disease Control has been sequencing coronavirus genomes for months to find changes in the virus and to see where variants might be coming from.

Once the U.K. variant was identified, Henry said the B.C. CDC sequenced the genome of viruses from people who had tested positive in recent weeks and so far, no more instances of the U.K. variant have been found.

Other positive tests from people in B.C. who have come through the U.K. are being sequenced now, Henry said.

“It may well be that we will identify additional people who have this variant who are here in B.C. now,” Henry said.

Henry added that the suspected increased infectiousness of the U.K. variant drives home the need to follow public health guidelines and orders to stop the spread of the coronavirus — regardless of the strain.

That means keeping hands washed, staying away from others if you are ill, isolating if you’ve been exposed, wearing a mask where required, keeping physical distances and keeping numbers small.

“Right now, that’s also an order: that you need to stay with your household for any social gatherings,” Henry said, adding those who live alone can gather with one or two close friends.

That order is in place until Jan. 8 and must be followed on New Year’s Eve, Henry said. She appealed to British Columbians to do so in order to give health care workers a break.

Raise a glass to 2021, she suggested, get takeout, but keep it within the household or connect virtually.

“This is what we need to do to get over this hump in our pandemic and make sure we enter 2021 positioned to immunize people who are most at risk and to get us through this next hard few weeks,” Henry said.

Moderna vaccine on its way

Henry said 11,930 British Columbians have now been vaccinated with the Pfizer-BioNTech vaccine.

The Moderna vaccine began arriving in B.C. on Tuesday, Henry said, with more arriving in coming days. She said as soon as it arrives it will go out to remote and isolated First Nations communities.

She said the groundwork has been laid with partners such as First Nations and the First Nations Health Authority to make sure logistics, training and supplies are in place.

“This is a very exciting and important move for us here in British Columbia,” Henry said.

The Moderna vaccine has less demanding handling requirements, which makes it more suitable for remote communities.

So far, Henry reported, two people have had allergic reactions to COVID-19 vaccination. She said this was not unexpected.

Both people who had reactions were treated, she said, and have fully recovered. Both were health care workers.

Vaccinations were down over the weekend but Henry said training and logistics were a focus in those days. She said those elements are both important to have right with the “fussy” vaccines, and it’s not accurate to say vaccination-related activity was on pause.

Responding to a question about the head of Ontario’s COVID-19 vaccine task force calling on Health Canada to “look into” the possibility of providing Moderna’s vaccine as a single dose, rather than two, Henry said such a change would “absolutely” be helpful to get the most out of the vaccine supply.

“It would be just wonderful if people only needed a single dose,” she said. “That would make our lives so much easier.”

Henry said experts around the world are looking at data about vaccine efficacy after just the first dose, but right now it is a two-dose program.

For December and January, all the doses B.C. has received of both the Pfizer and Moderna vaccines are being used for first doses. None are being held back for second doses because there is greater confidence in the supply chain.

Henry said second doses for some people will occur in February — 35 days after the first — and there is good data suggesting immunity will hold out for that time.

Henry and Dix had held their last news conference on Dec. 23. New numbers were released online on Christmas Eve, but the province hasn’t had any fresh data since.

It will still be several days before numbers reflect whether holiday gatherings lead to a spike in new cases, given the virus’s 14-day incubation period.