The 2021 UK census will include a national count of LGBT people for the first time in its history.

The survey, to be conducted by the Office of National Statistics on March 21, will ask: ‘Is the gender you identify with the same as your sex registered at birth?’

The voluntary question will allow people over 16 to answer yes or no before specifying their gender identity.

The move has been welcomed by many in the LGBTQ+ community who hailed it as ‘a historic moment’.

The ONS said that following discussions among the public, charities and government bodies, this year’s census will ask new questions relevant to LGBTQ+ communities on gender identity and sexual orientation.

These questions are set to give a better understanding of lesbian, gay, bisexual and transgender populations which will help organisations combat any inequalities these groups may face and show where relevant services are needed.

People can also request an individual census questionnaire and give their answers separately to their current household if preferred.

Iain Bell, deputy national statistician at the ONS, said: ‘While there are estimates of sexual orientation at a national and regional level, it is not possible to produce robust estimates for all local authorities – that’s what census data will give. 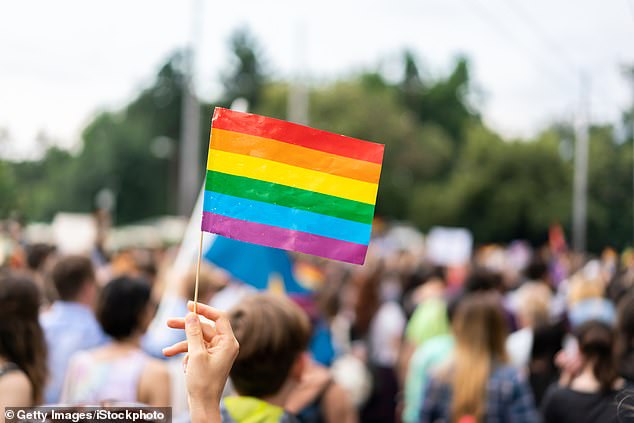 The survey, to be conducted by the Office of National Statistics on March 21, will ask: ‘Is the gender you identify with the same as your sex registered at birth?’

‘And there is no robust data available on gender identity at all. These data are needed by local authorities and service providers to inform the provision of services.

‘The sexual orientation and gender identity questions will be voluntary for people aged 16 and over.

‘Without robust data on the size of the LGBT population at a national and local level, decision-makers are operating in a vacuum, unaware of the extent and nature of disadvantage which LGBT people may be experiencing in terms of health, educational outcomes, employment and housing.’

The ONS stressed that, as with all census questions, no personal information is shared, data is anonymised before aggregated statistics are used to shape policies and services.

Stonewall, which campaigns for the equality of lesbian, gay, bisexual and trans people across Britain, has welcomed the move.

Nancy Kelley, Chief Executive of Stonewall, said: ‘The 2021 Census will be a historic moment for LGBT+ communities.

‘For the first time, the Census includes two new voluntary questions on sexual orientation and trans status, as well as clear and inclusive guidance on how to answer the Census sex question.

‘This will give us an accurate picture of the size and make-up of the LGBT+ population in Britain.

‘For far too long, our community has been a hidden population. Collecting this vital data will ensure researchers, policymakers, service providers and community organisations are able to understand the needs of LGBT+ people and develop tailored services to help us be treated fairly and achieve our potential.

‘Now we need to make sure all lesbian, gay, bi and trans people in England and Wales feel confident and supported to fill in the Census on 21 March.’

The census is the once-in-a-decade survey that gives the most accurate estimate of all people and households in England and Wales.

This year the census will be run mostly online, with households receiving a letter with a unique access code in March, allowing them to complete the questionnaire on computers, tablets, phones or laptops.

Paper questionnaires will also be available on request, along with language support via a free phone contact centre.

The results will be available in 2022.