About 200 more pilot whales have been stranded on a shallow sandbar off Tasmania’s west coast, bringing the total to more than 470.

The majority of the pilot whales, which were discovered on Wednesday morning about five kilometres south of the original stranding site at Macquarie Harbour, have died.

Only 25 whales have been saved since the rescue effort was launched after 270 were spotted struggling in shallow water on Monday.

Rescue teams are now racing against the clock to save the whales, with Parks and Wildlife regional manager Nic Deka conceding time is quickly running out.

‘I would expect that we would shift through a transition from rescue into the retrieval and disposal effort … we’re just considering options at the present time,’ he told the ABC.

About 200 more whales have been stranded on a shallow sandbar off Tasmania’s west coast, bringing the total to more than 470 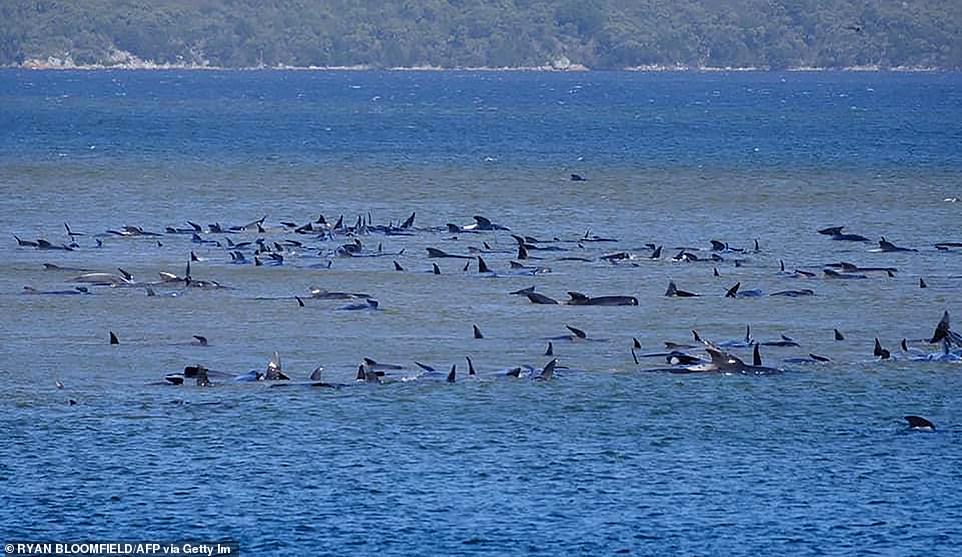 Rescuers have managed to guide around 25 of the animals back into deeper waters, sadly many of them are still battling for life in the shallow water, as teams work to free them 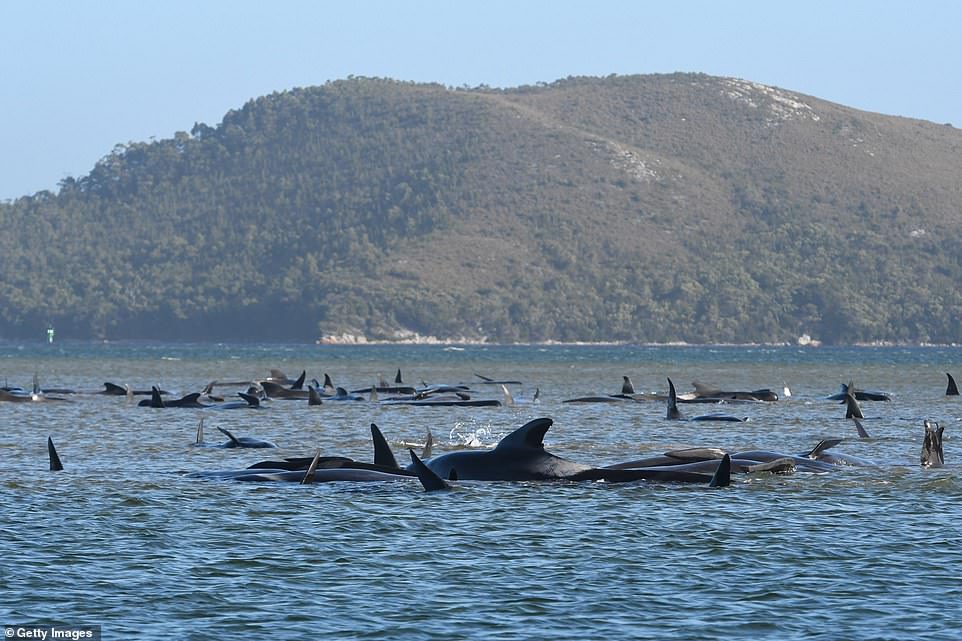 While Tasmania’s west coast is a hot-spot for whale strandings, this week’s incident is the largest to have occurred for at least a decade on the Australian island 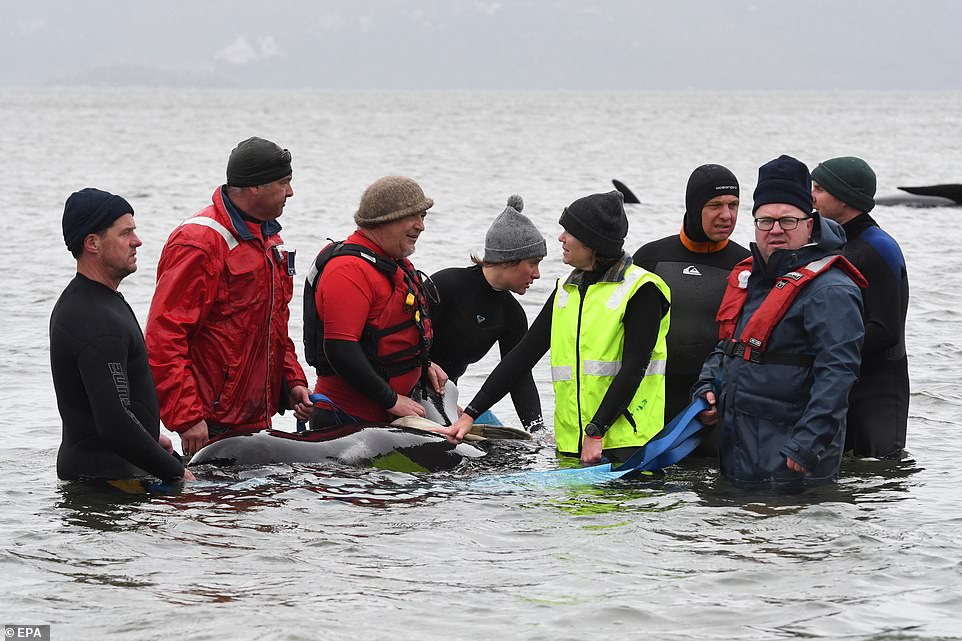 Sixty rescuers, including local fishermen and volunteers, are working in teams to help free the animals – using harnesses fitted to boats to guide them back out to sea 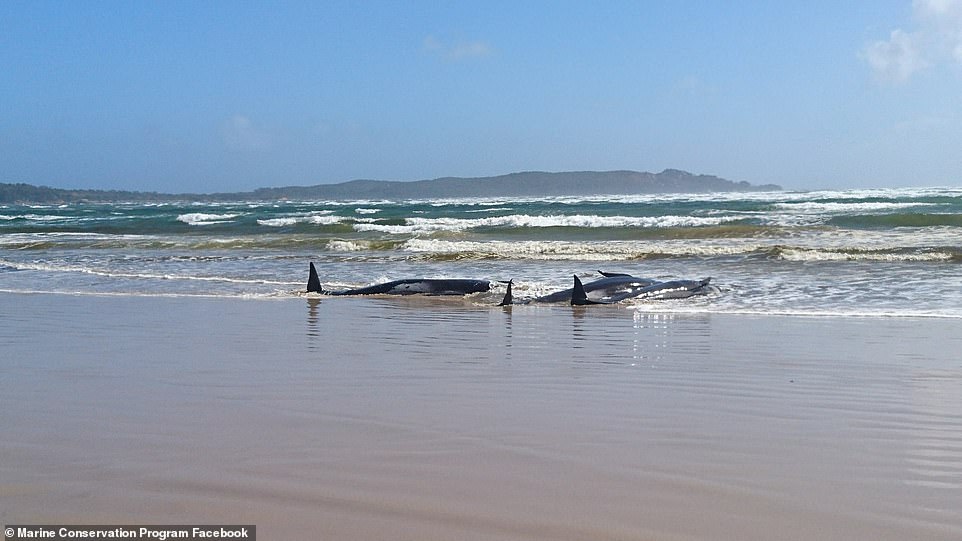 Beached whales most often die of dehydration. The animals have a very thick layer of blubber that keeps them warm in deep-sea temperatures, but causes them to rapidly overheat near the surface

Hampering rescue efforts are ‘ugly’ conditions including cold temperatures and rain, though Carlyon added that the conditions will help the whales survive longer by keeping them wet and cool.

Beached whales most often die of dehydration. The animals have a very thick layer of blubber that keeps them warm in deep-sea temperatures, but causes them to rapidly overheat near the surface.

A stranded whale may also be crushed to death by their own weight, without water acting as a support, or else if they are stranded in deep water they may drown if their blowholes are covered.

All of the whales have to be reached by boat, limiting the number that can be worked on at any one time, while rescuers are having to operate in teams to prevent hypothermia.

They are also battling the unusual tides in Macquarie Harbour, which are dictated by barometric pressure.

Kris Carlyon, a government marine biologist, said a team of around 60 rescuers – including local fishermen and volunteers – are being forced to ‘triage’ the whales, working to free those who are in the best condition and easiest to reach first.

Workers are using boats fitted with slings to drag the animals off the sandbar, along with teams of people in the water to guide the animal back into the ocean. 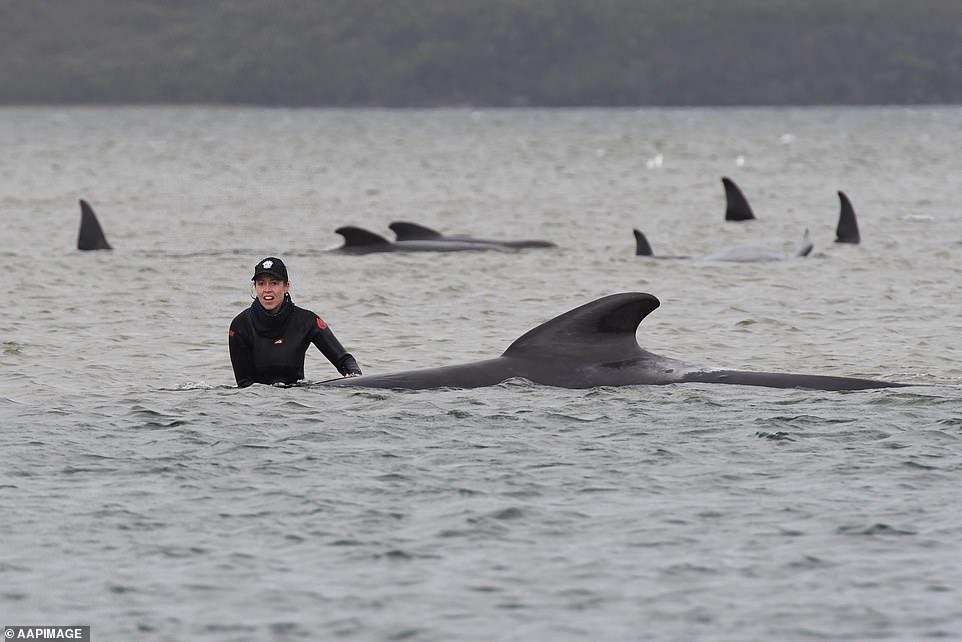 Scientists do not know how or why pods of whales become beached, but speculate that the group could have become disoriented after feeding near the sandbar, or else followed members of the pod who strayed off-course 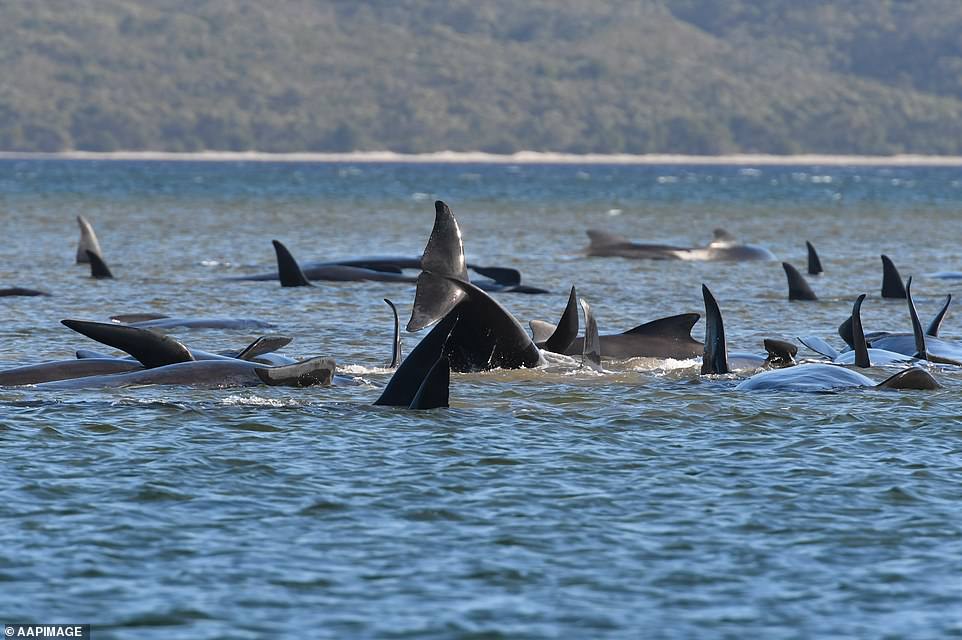 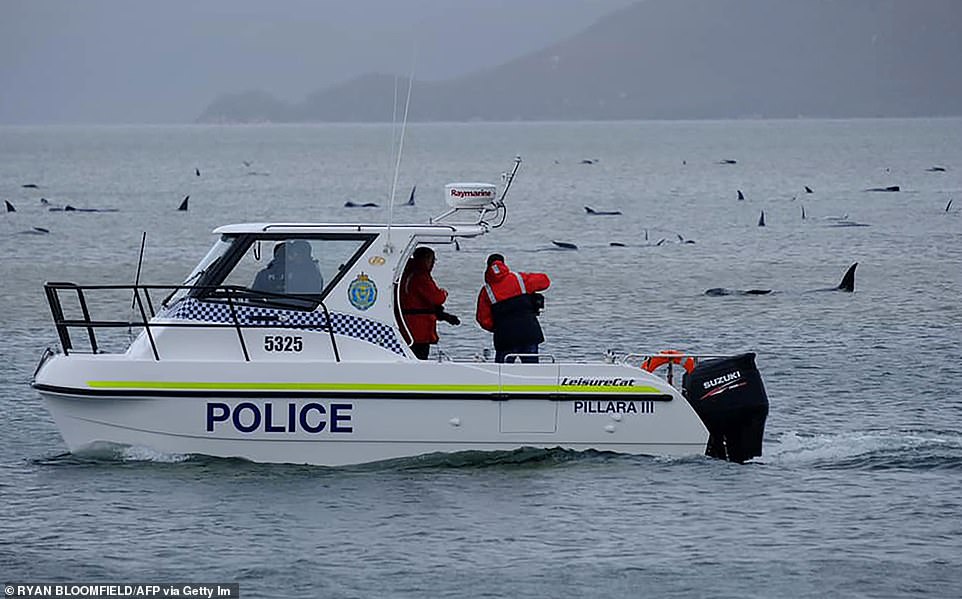 Rescuers are being slowed down because the whales can only be reached by boat, limiting the number of people who can help at any one time, and rescuers are having to operate in teams to prevent hypothermia 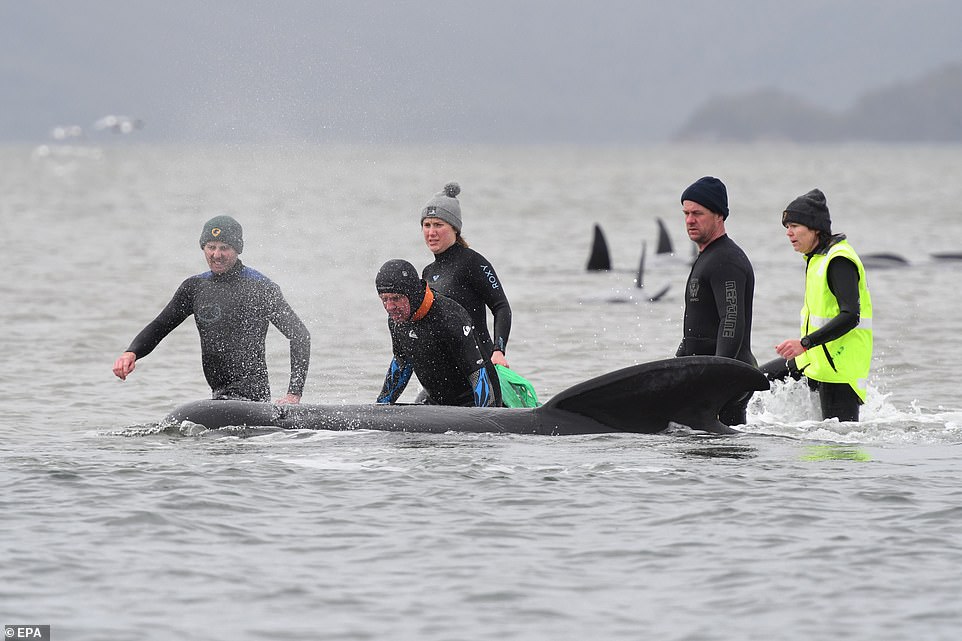 Though mass whale strandings occur relatively often in Tasmania, such a large group has not been seen in the area for more than a decade.

Scientists believe the animals – which were spotted from the air on Monday – come from two pods that number around 470 in total.

Once the whales are returned to deeper water, Carlyon said, the biggest challenge will be herding the social creatures out of the sandbar-riddled harbour and back into the open ocean.

Scientists said it was unclear what caused the latest stranding, but Carlyon suggested the pod may have gone off track after feeding close to the shoreline or by following one or two whales that strayed. 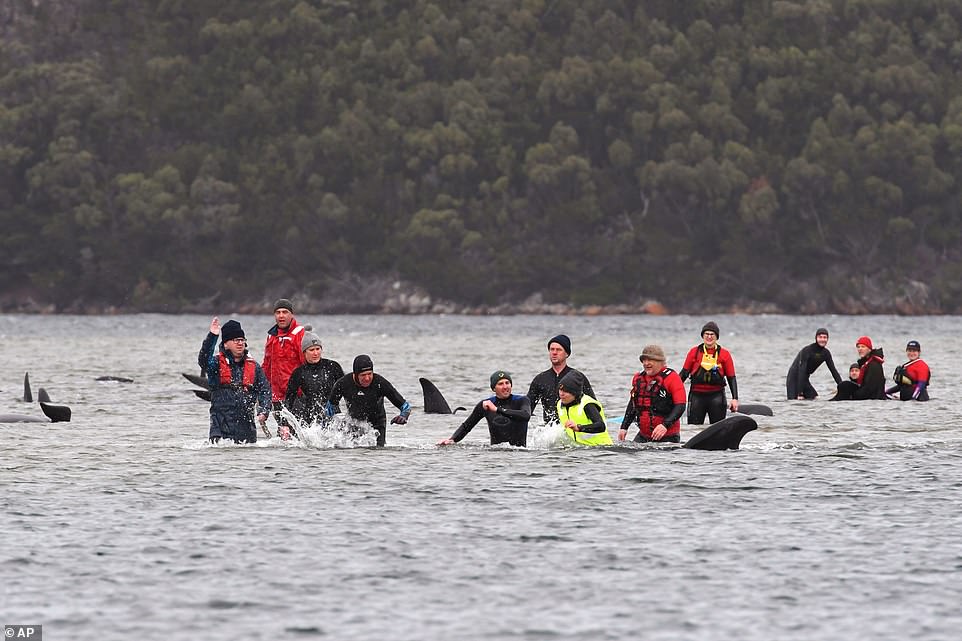 Rescue workers say they are being forced to ‘triage’ the whales due to the large number, prioritising the healthiest and easiest-to-reach and rescuing them first before dealing with the trickier cases 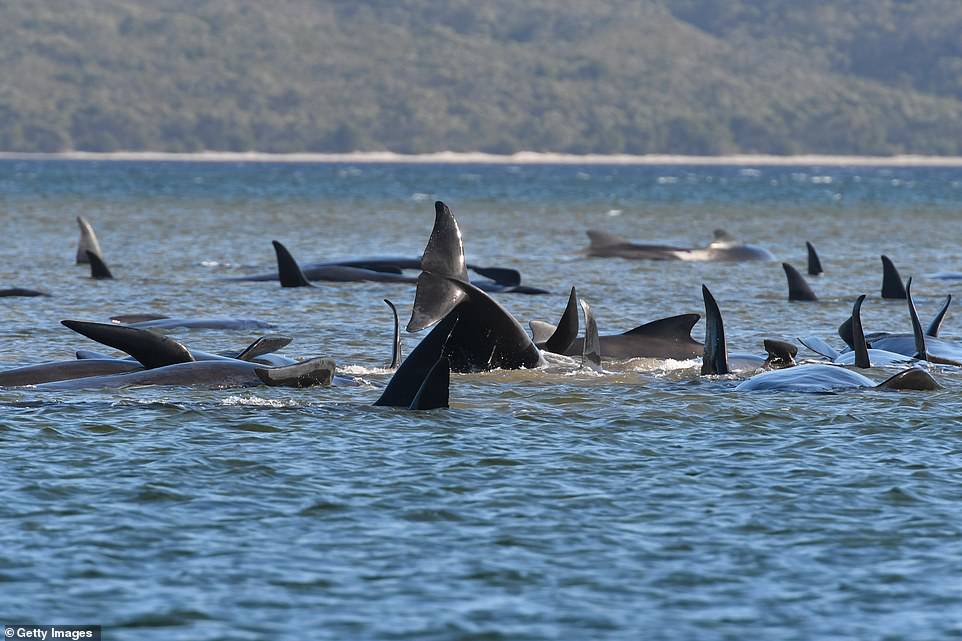 Beached whales most often die of dehydration caused by overheating, but may also be crushed under their own bodyweight without water to support them, or else drown if water covers their blowhole 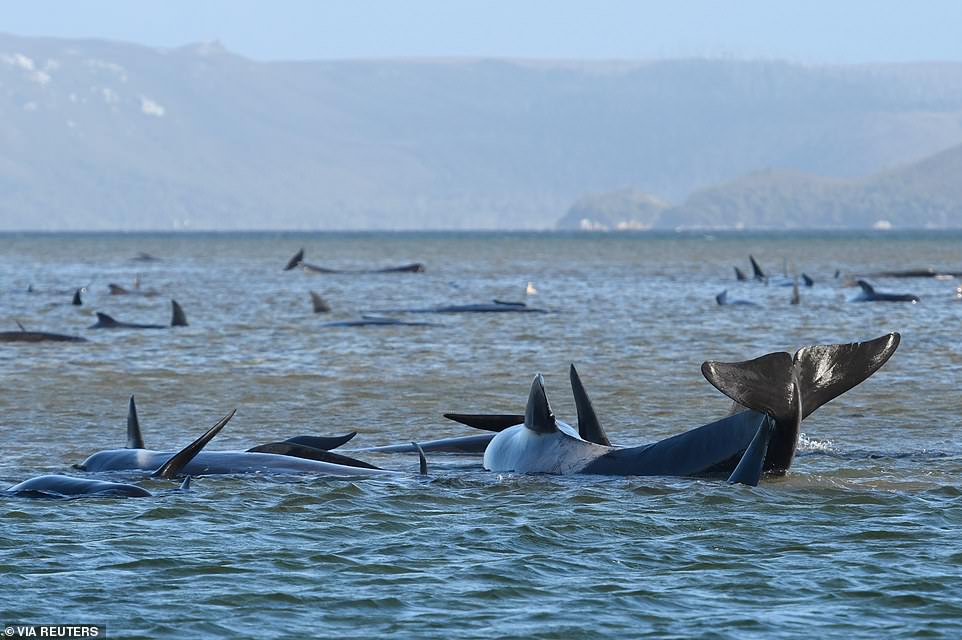 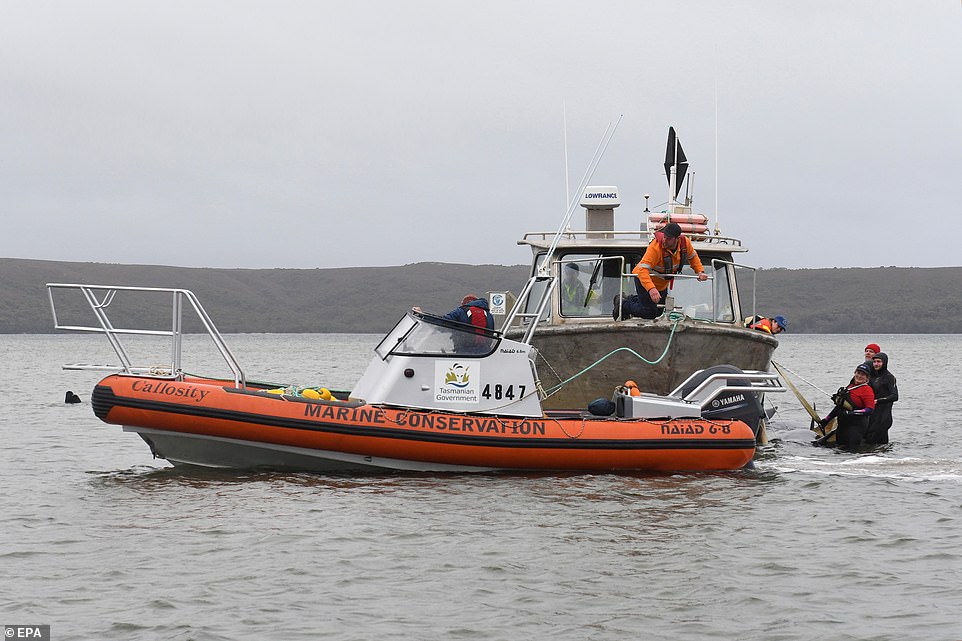 Rescue workers are towed out to sea as they battle cold temperatures, rain, and unpredictable tides to try and save 155 pilot whales stranded off the coast of Tasmania

‘It seems to be a notorious whale trap… you do tend to get these mass stranding events there,’ she told AFP.

Stockin said that while pilot whales were typically more resilient than other whale species, rescuers faced a race against the clock as the mammals can overheat, their muscles deteriorate and their organs become crushed outside their natural environment.

‘Time is never your friend,’ she said. ‘So without doubt, the more expedited rescue missions are, the more likely there is an increased (chance) of survival.’

Mike Double, the head of the Tasmania-based Australian Marine Mammal Centre, said it was ‘tragic’ that such a ‘massive’ pod had become stranded but other whales had previously been saved from the same location.

‘The state team responsible for responding are extremely experienced and they’ll be absolutely working incredibly hard to get the best possible outcome,’ he said.

Most of a 30-strong group on a nearby beach were found dead Monday, while about 60 other whales on the sandbars are also believed to have since died.

James Tucker, from the Marine Science Centre at Southern Cross University in New South Wales, said it will be a ‘huge operation’ disposing for that many whale carcasses.

There are four ways to dispose of the whale carcasses; dragging them out to sea, burying them, leaving them to decompose, or disposing them at a waste management facility.

Leaving the carcasses to decompose naturally can be a risk as they tend to attract sharks.