A total of 20 residents at a care home have died due to suspected Coronavirus – with four deaths taking place in the past 24 hours.

The Berelands Care Home, in Prestwick, Ayrshire, has been ravaged by the deadly bug.

One resident passed away on Friday while three people died yesterday.

Some 16 people had died in the previous days.

Berelands Care Home in Prestwick confirmed 16 residents have died since 4 April. (Man in PPE pictured outside the care home)

A spokesman for Berelands Care Home said: ‘We are deeply saddened to confirm that four more residents have died from what we believe to be Covid-19.

‘Three of our residents passed away yesterday, and one this morning.

‘This is profoundly upsetting, and our deepest sympathies are with their families and friends.

‘We are entirely focused on caring for, and protecting, all our residents and are extremely grateful to our dedicated staff who are doing their absolute best at this extraordinarily difficult time.

‘We are closely monitoring the health of residents and staff, and supporting the families of those who have died, while continuing to follow all official guidance.’

It comes as more than 40 per cent of nursing homes may have cases of coronavirus, a nationwide poll of thousands of carers suggests.

Mrs Sturgeon said 433 care homes – about 40 per cent of all those in Scotland – had now reported cases of the virus.

Of 2,800 carers surveyed nationwide, a shocking 42 per cent said they were looking after residents who were suspected of having the killer infection.

An additional 28 per cent said they were dealing with patients who had officially been diagnosed.

Almost half (44 per cent) of care workers said they knew of a colleague who had suspected coronavirus. 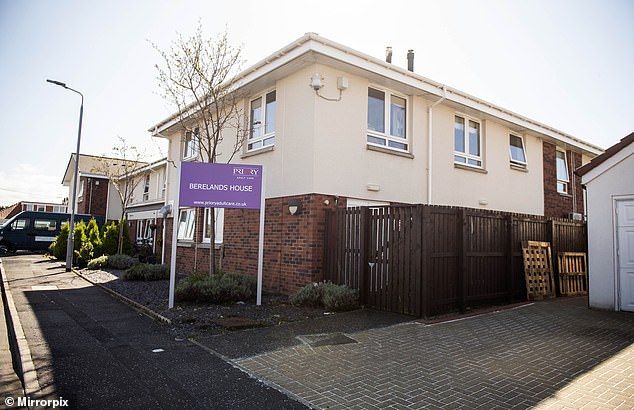 A spokesman for Berelands Care Home said: ‘We are deeply saddened to confirm that four more residents have died from what we believe to be Covid-19’

It provides the biggest snapshot yet of the impact of COVID-19 on the sector and suggests the care home crisis is deeper than the Government is willing to admit.

Number 10 insists that just 15 per cent of nursing homes have been plagued with two or more coronavirus cases.

The survey, conducted by ITV News and the care homes reviews website carehome.co.uk, also found eight out of 10 carers have not had access to testing themselves.

Three quarters reported no access to testing for their residents.

Official figures revealed yesterday a quarter of all coronavirus deaths in Scotland have been in care homes.

Data from the National Records of Scotland showed 962 people diagnosed with, or suspected of having, COVID-19 had died.

The figure was five times higher than the 5 per cent number given by the Office for National Statistics, which collates data in England and Wales.

Government experts found 217 of 3,700 deaths had been recorded in care homes across the two nations registered up until April 3.

The ONS statistics also showed that another 5 per cent of deaths had been recorded outside of hospitals, such as in hospices.

Separate figures showed the true number of deaths was 52 per cent higher than the count given by the Department of Health every day.

The Department of Health figures are affected by a backlog in hospital recordings, meaning that hundreds of deaths are not registered to be counted.

Almost all (94 per cent) of those asked felt that the government should be doing more to test clients and staff in care homes.

Access to personal protective equipment, or PPE , was also of concern to respondents.

Half said they had not received sufficient quantities of PPE, whilst 59 per cent felt the PPE they received was not safe or did not offer the necessary levels of protection.

Eighty-three per cent of carers said they were worried about transmitting COVID-19 to their family after working in the homes.

Health Secretary Matt Hancock’s view of the care home situation has been in stark contrast to what care providers have said.

Mr Hancock said on Thursday that 15 per cent of care homes had two or more cases of the virus – one in seven.

He appeared to deny claims made by the care home executives that up to two thirds of all care homes have outbreaks when asked about the validity of claims on Good Morning Britain.

He described the 15 per cent figure as ‘robust’ and said Number 10 has ‘high confidence’ in it.

About 5,300 care home residents in the UK have died from coronavirus, it was predicted last night.

Healthcare analysts LaingBuisson surveyed groups representing 13 per cent of UK care homes. They suggest up to 28 per cent of coronavirus deaths in the UK may have occurred in care homes.

The first comprehensive survey of the sector experts found that 1.4 per cent of older residents in social care have died outside hospital due to confirmed or suspected coronavirus as of April 15.

By extrapolation, there have been an estimated 5,300 deaths in total. The shocking figure is higher than the Daily Mail revealed it to be earlier this week. 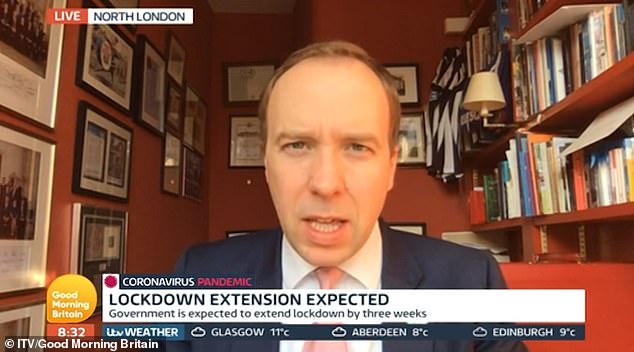 Health Secretary Matt Hancock’s view of the care home situation has been in stark contrast to what care providers have said. He appeared to deny claims that up to two thirds of all care homes have outbreaks when asked about the validity of claims on Good Morning Britain on Thursday (pictured) and described the 15 per cent figure as ‘robust’ 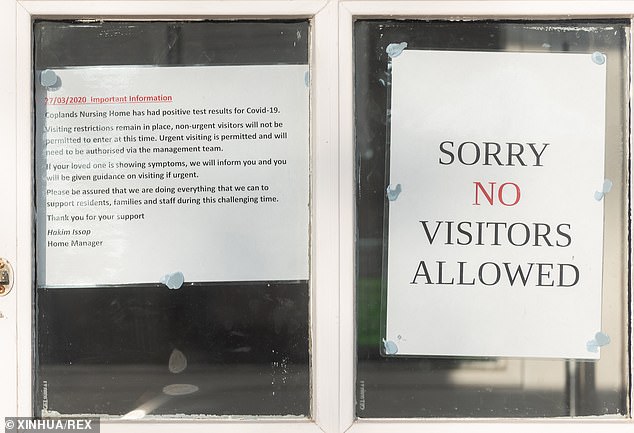 It comes as more than 40 per cent of nursing homes may have cases of coronavirus , a nationwide poll of thousands of carers suggests. (A visitors’ notice stating cases of COVID-19 within Coplands Nursing Home in Wembley, northwest London)

Meanwhile, in Scotland, a quarter of all coronavirus deaths in Scotland have been in care homes, according to official data.

The National Records of Scotland showed 962 people diagnosed with, or suspected of having, COVID-19 had died.

The figure was five times higher than the 5 per cent number given by the Office for National Statistics, which collates data in England and Wales.

Two more residents have died at a Luton care home taking the total number of deaths there during the coronavirus pandemic to 17.

Last week it was announced that 15 residents at the Castletroy Residential home in Luton had died.

Five of those who died had tested positive for Covid-19.

A spokeswoman for Luton Borough Council said the two further residents who had died had not been tested for Covid-19.

The home has 69 beds for elderly people with nursing or personal care needs.

The two new deaths were announced after the government said earlier that all UK care home residents and staff with Covid-19 symptoms are to be tested.

In a statement, Luton Borough Council said: ‘We are sad to report that 17 residents of the home have passed away since 28 March. Of these five had tested positive for Covid-19.

‘Our thoughts are with the friends and family of the residents, as well as the staff of the home who are working in extremely difficult circumstances.’

The statement added: ‘We share the frustration of many over the delay in equipment being made available from the government to those in front line roles.

‘Following a letter from Leader of the Council, Hazel Simmons, to Secretary of State for Health Matt Hancock, Bedfordshire received a supply of PPE last week.

‘The distribution of this, along with other supplies, is being coordinated by the council to go to those settings working directly with residents, in line with national PPE guidance.

‘We have been working closely with all Luton care homes to ensure they have the right PPE in place at a time when supplies are limited. In some cases, this has meant sourcing our own supplies where government delays meant staff would otherwise have been left without.

‘The team at Castletroy have been provided with a supply of adequate PPE including gloves, aprons and face masks throughout.

‘We are still having to work extremely hard to ensure that services and providers have access to appropriate and timely PPE when needed. We understand there will be more equipment arriving shortly which will be prioritised according to need across Bedfordshire.

‘We continue to work closely with the team at Castletroy to see what additional support to staff and families might be helpful at this particularly difficult time.’