Police officers waging a war against violent London drug gangs who are peddling illegal substances to smaller towns and cities across Britain have smashed more than 80 supply lines as part of a major crime crackdown.

Met Police chiefs say 87 ‘county lines’ drug distribution routes have been cut off and 18 dealers controlling some of those lines have been jailed for a total of more than 50 years as part of its £1million Operation Orochi.

A further 1,300 county lines suspects have also been charged for violent offences, including 24 murders, by the force since the crackdown was launched last year.

And galvanised by their success for far, Met Police chiefs, who will now be handed a £5million war chest by the Home Office to aid in their battle against the violent drug gangs, have promised to destroy another 210 supply lines over the next 12 months.

In a statement issued today, the force’s Commissioner, Cressida Dick, said: ‘Over the last year we have made significant progress in our fight against violent drug dealers.

Police officers waging a war against violent London drug gangs who are peddling illegal substances to smaller towns and cities across Britain have smashed more than 80 supply lines as part of a major crime crackdown. Pictured: A map showing some of the county lines 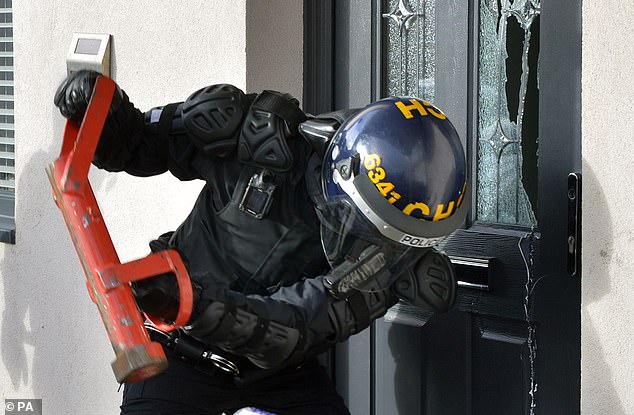 Met Police chiefs say 87 ‘county lines’ drug distribution routes have been cut off and 18 dealers jailed for a total of more than 50 years as part of its £1million Operation Orochi. Pictured: A police officer smashes at the door of an address suspected to be involved in county lines dealing 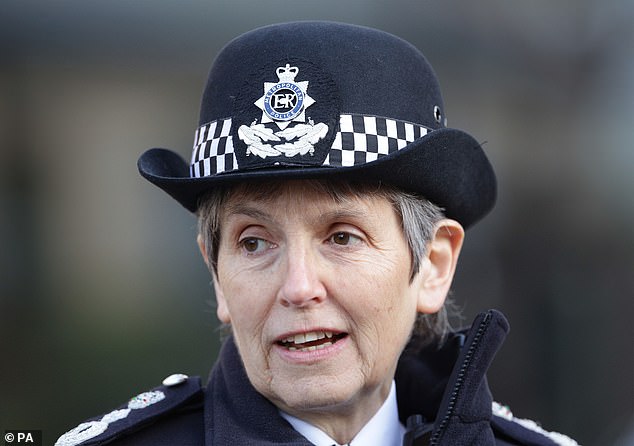 Met Police chiefs will now be handed a £5million war chest by the Home Office to aid in their battle against the violent drug gangs. Pictured: Metropolitan Police Commissioner Cressida Dick

‘The close partnerships formed with colleagues nationally have been crucial to this success, and I am grateful to them all for the part they have played – even throughout the last 10 challenging weeks.

County lines: The centralised drug distribution system which minimises risks for dealers while exploiting the vulnerable

County lines is where illegal drugs are transported from one area to another, often across police and local authority boundaries.

The drugs are usually transported by children or vulnerable people who are coerced into it by gangs.

It involves a centralised mobile phone, often in a major city, such as London, which is used to take the orders of drugs, as well as send out mass texts offering drugs for sale, in an area outside the city – such as the home counties.

The mobile phone is called the ‘county line’.

Local dealers who are part of the gang then distribute the drugs in that area.

A common feature in county lines drug supply is the exploitation of young and vulnerable people.

The dealers will frequently target children and adults – often with mental health or addiction problems – to act as drug runners or move cash so they can stay under the radar of law enforcement.

When county lines are set up in an area there are often increases in violence and weapons-related crimes.

‘Across policing the commitment to driving down violence has never wavered.’

The data was analysed against the Met’s crime recording systems.

It showed that more than 1,300 individuals linked to County Lines have been charged with charged with approximately 2,000 violent offences in the capital in the financial year from 2019 to 2020.

Among the offences were 24 murders, 270 robberies, over 200 weapons offences, including 23 of possessing a firearm with intent, and nearly 200 drug trafficking offences.

And today the Met Police scored another jail term as part of its Operation Orochi.

Wayne Mann, 35, from London, was today jailed for four years and two months after pleading guilty to being concerned in the supply of Class A drugs.

He was caught after Met Police officers raided his address in London in January and found he was controlling the so-called ‘Tommy Line’ – which was being used to distribute drugs in Norfolk.

As part of ‘county lines’ dealing, a central mobile phone, usually based in London, is used to send and receive drug orders from users in counties outside the capital – hence the name ‘county lines’.

Locally-based dealers, often vulnerable teenagers, or sometimes younger, are then instructed by those in control of the central line to distribute the drugs.

Police say the ‘Tommy Line’ had created a user base of 300 people based in or near Norwich – bringing with it a rise in violence.

When police raised Mann’s address heroin with a street value of £12,000 was seized and man, who had previous convictions for violence and weapons carriage and is linked to gangs was charged with concerned in the supply of Class A drugs and later jailed.

A further 17 other dealers in control of lines in 11 different police force areas across Britain have also been jailed. 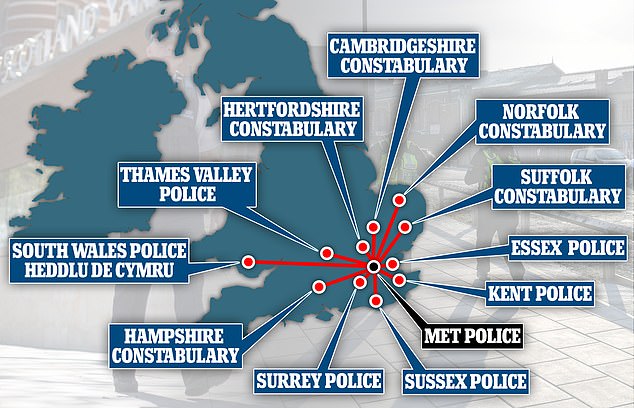 A total of 18 dealers in control of lines in 11 different police force areas across Britain have also been jailed. Pictured: A map of the police force areas where county lines gangs have been hit by the Met Police’s Operation Orochi 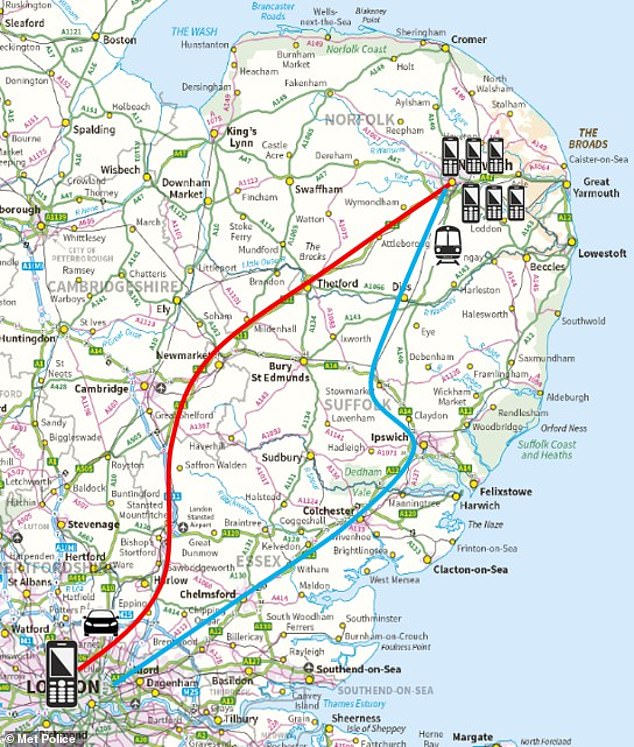 Police say the ‘Tommy Line’ (pictured: a map of the network) had created a user base of 300 people based in or near Norwich – bringing with it a rise in violence.

More than 20 county lines shut down in Norfolk alone

Norfolk Police have closed down 20 county lines permanently in its biggest operation to tackle Class A drug dealing in Norfolk to date.

The force is one of those to team up with the Met Police to tackle the scourge of county lines drug dealing in the region.

A total of 25 people have been charged and remanded for drug supply offences – eight of which have already been sentenced before the courts. They are:

The 17 dealers were jailed for a total of more than 50 years.

Cressida Dick said:  ‘Over the last year we have developed a significant evidence base which shows how criminals use telecommunications to run their operations.

‘We will work with whoever necessary to restrict the ability of these individuals to carry out this activity and destroy the business model of County Lines entirely.’

The police chief also praised the work of the Met Police’s partners and called on local agencies, charities, schools and parents to help them ‘protect the most vulnerable in our communities from being exploited by gangs into running drugs across the UK’.

Operation Orochi was launched at the end of last year after the forced received £1.1million of funding from the Home Office to tackle County Lines.

Under Orochi officers have closed 87 County Lines and achieved 183 charges for drug trafficking.

Only one lineholder was female and the other 17 were male, the Met Police say.

Only one phone being used to run a line was registered, albeit in a false name, and every other phone was an unregistered Pay-as-you-Go ‘burner’ device.

The Met Police say that when they have  reviewed phone data there has been a consistent pattern of large bulk text messages being sent by the lineholder, advertising the sale of drugs. 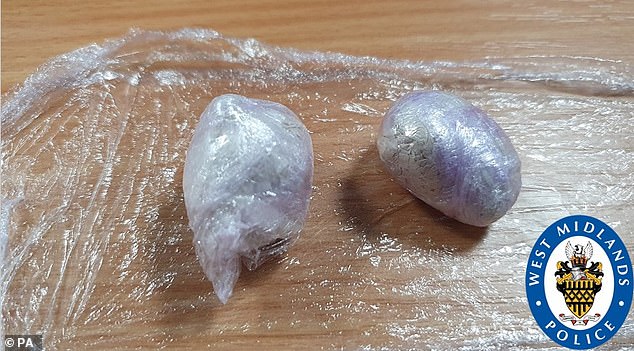 Sometimes tens of thousands of messages were sent in short periods of time.

On Friday, Operation Orochi was given a major boost when the Home Office announced an additional £5million of funding to enable the Met to continue its work tackling County Lines.

With the money, the force has pledged to arrest, charge and convict a further 210 lineholders peddling drugs across the UK over the next 12 months.

Commissioner Dick added: ‘I am pleased at the additional funding announced by the Home Office which will go towards our work in this area.

‘With this we will continue the success of Op Orochi and bring hundreds more individuals to justice.’