As many as one in seven Medieval Britons had cancer at the time of their death, a new study reveals.

It was previously thought less than one per cent of people living on the British Isles between the 6th and 16th centuries suffered with the disease.

A combination of longer lives, pollution, cigarettes and DNA-damaging viruses means that half of all people alive today will get cancer at some point in their life.

As many as one in seven Medieval Britons had cancer at the time of their death, a new study reveals

A Cambridge University study used x-rays and CT scans for the first time to study the remains of 143 skeletons found at six cemeteries.

Previous studies concluded just one in 100 people died with cancer based on visual examinations of a bone’s exterior.

But the ability to non-invasively inspect the interior of the bones revealed further signs of the disease.

‘Only some cancer spreads to bone, and of these only a few are visible on its surface, so we searched within the bone for signs of malignancy.

‘Modern research shows a third to a half of people with soft tissue cancers will find the tumour spreads to their bones.’ 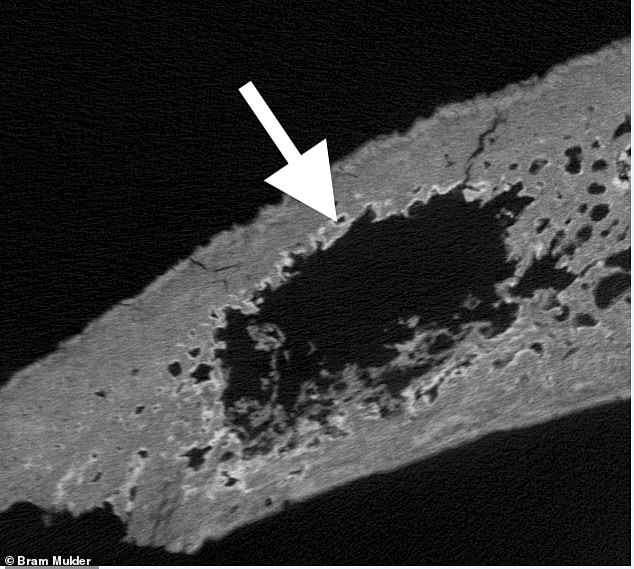 A Cambridge University study used x-rays and CT scans for the first time to study the remains of 143 skeletons found at six cemeteries. Experts looked for signs of metastasis on bone remains (pictured) 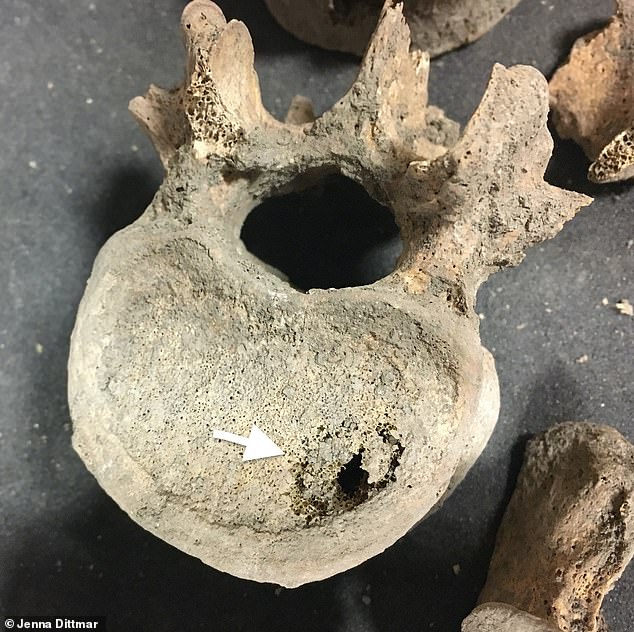 A combination of longer lives, pollution, cigarettes and DNA-damaging viruses means that half of all people alive today will get cancer at some point in their life. Pictured, cancer metastases (white arrow) on an excavated medieval bone from the spine

The researchers found evidence of cancer on 3.5 per cent of the skeletons and extrapolated this figure based on what they know about how many people with cancer develop these bone scars.

Researchers reached their estimate on the basis that CT scans detect bone metastases around 75 per cent of the time, and only a third to half of cancer deaths involve spread to the bone.

More than 60 grave uncovered at Anglo-Saxon cemetery in Cambridge

An Anglo-Saxon burial ground has been discovered on a plot of land earmarked to become University of Cambridge accommodation.

Excavations at the site revealed more than 60 graves which date back to a similar period as the famed Sutton Hoo site, around 400-650AD.

Many of the newly-discovered burials contain grave goods such as bronze brooches, bead necklaces, glass flasks, weapons, and pottery.

Experts claim the haul of artefacts is one of British archaeology’s most significant finds since the Sutton Hoo burial ship was found in 1938.

‘We think the total proportion of the medieval population that probably suffered with a cancer somewhere in their body was between nine and 14 per cent,’ says Dr Mitchell.

Cancer in modern Britain is around four times as common as it was in Medieval times, with the increase due to myriad factors increasing the risk.

‘Until now it was thought that the most significant causes of ill health in medieval people were infectious diseases such as dysentery and bubonic plague, along with malnutrition and injuries due to accidents or warfare,’ Dr Jenna Dittmar, study co-author, said.

‘We now have to add cancer as one of the major classes of disease that afflicted medieval people.’

Tobacco, which was first imported into Britain in the 16th century with the colonising of the Americas, likely contributed to cancer rates.

So too did the production of cancer-causing pollutants that have become ubiquitous since the industrial revolution of the 18th century.

The researchers also suggest the proliferation of DNA-damaging viruses and longer lives may be to blame.

But in Medieval britain, life expectancy was about half of this.

‘In general half of medieval people died in childhood, resulting in a correspondingly short average life expectancy for the total population.

‘Therefore the approximate average life expectancy might be in the region of 30-40 for medieval Britain.

‘However, all the people in whom we found cancer were middle aged or older individuals.’

The researchers caution that the sample size is inevitably limited and diagnosing cancer in those lain dead for many centuries is challenging.

‘We need further studies using CT scanning of apparently normal skeletons in different regions and time periods to see how common cancer was in key civilizations of the past,’ added Dr Mitchell.

The research is published in the journal Cancer.