The groundbreaking Oxford vaccine is expected to be approved for use within days – giving Britain a massive New Year boost in the fight against coronavirus.

There is growing optimism within the Government that the Medicines and Healthcare Regulatory Agency (MHRA) will give the green light to roll out the vaccine before the end of this week.

Britain has pre-ordered 100 million doses of the drug, which has been developed by Oxford University with the help of the pharma giant AstraZeneca.

The first of 40 million doses of another vaccine – manufactured by Pfizer – was given to British patient Margaret Keenan, 91, earlier this month. But the Oxford vaccine is cheaper and easier to distribute because it can be stored at normal fridge temperatures rather than the minus 70C required for the one Mrs Keenan had.

Football stadiums, conference centres and racecourses are expected to become makeshift vaccination hubs within days of the regulator granting approval, allowing the Government to build quickly and massively on the 800,000 people who, according to the Prime Minister, have had the Pfizer jab.

Officials hope eventually to be vaccinating up to two million people a week and to have reached the 20 million most vulnerable people by March.

Nurse Practitioner Terri Welch administers a dose of the Pfizer-BioNTech Covid-19 vaccine to a patient at the Haxby and Wigginton Group Medical Practice in Haxby, northern England

However, amid concern about the recent appearance of more transmittable mutations of the Covid-19 virus, The Mail on Sunday can reveal that the Government is examining whether to give people a single dose of the vaccine – rather than the recommended two jabs given 21 days apart in the case of the Pfizer drug and four weeks apart for the Oxford vaccine.

Former Prime Minister Tony Blair last week called for such an approach to ‘radically accelerate’ the vaccination programme and offer a degree of protection to many more people.

Pfizer says two doses are needed to provide the maximum protection, but Professor David Salisbury, who was in charge of immunisation at the Department of Health until 2003, said: ‘You give one dose, you get 91 per cent [protection]. You give two doses and you get 95 per cent. You are only gaining four per cent for giving the second dose.

‘With current circumstances, I would strongly urge using as many first doses as you possibly can for risk groups and, only after you have done all of that, come back with second doses.’ 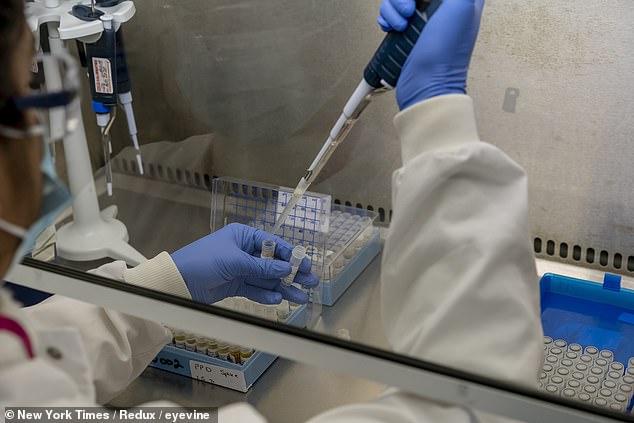 But Prof Salisbury did acknowledge that administering only one dose of the Oxford vaccine would pose more difficulties because it has lower efficacy than Pfizer’s.

There are also questions over the dosage regime for the Oxford vaccine after researchers found those given a half dose followed by a full dose four weeks later were better protected than those given two full doses. The MHRA is understood to be considering which of the two approaches to approve.

Authorisation for the Oxford vaccine would be particularly welcome after the emergence of two new highly infectious mutant strains of the virus. The first – called VUI-202012/01 – was detected in southern England in September.

It is now thought to account for up to two-thirds of positive tests in recent weeks in the South East and the East of England – and triggered the decision to put most of southern England into tier 4 restrictions.

It has also prompted more than 50 countries to impose travel restrictions. Spain yesterday confirmed four cases of the variant in Madrid which involved people who had recently travelled from the UK.

The news came shortly after France announced that a man from the city of Tours had tested positive for the mutant virus after returning from London on December 19. 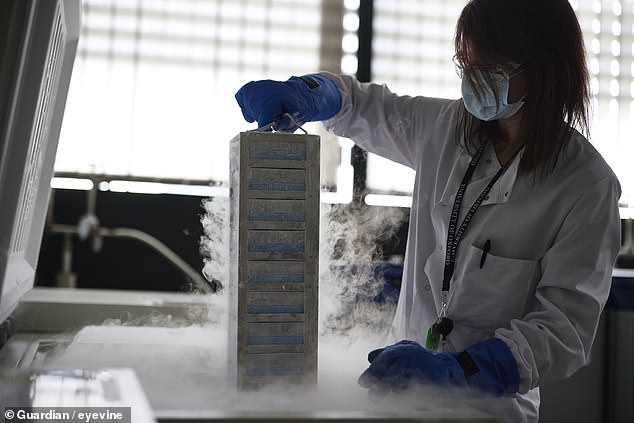 Britain has pre-ordered 100 million doses of the drug, which has been developed by Oxford University with the help of the pharma giant AstraZeneca

Japan, Sweden, Denmark, Germany, Italy, the Netherlands and Australia have also reported cases of the variant which is 70 per cent more transmissable than other version of the virus.

There is also evidence that the strain is ‘particularly marked in children’, according to a study by the London School of Hygiene and Tropical Medicine.

In addition, there is considerable anxiety about a second mutant strain from South Africa. Two cases have been identified in England – one in London, the other in the North West. Health Secretary Matt Hancock last week pleaded with anyone who had returned from South Africa within the past fortnight to quarantine immediately.

Dr Susan Hopkins, managing director of Public Health England, said ‘both [strains] look like they are more transmissible’, but admitted experts are ‘still learning’ about the South African variant.

In more positive news, it emerged yesterday that British scientists are trialling a new drug which may protect those exposed to the virus from going on to develop symptoms.

The antibody treatment would provide instant immunity and could be administered to hospital patients, care home residents and university students in the event of an outbreak of the virus in a confined space.

Dr Catherine Houlihan, a virologist at University College London hospitals trust who is leading the study codenamed Storm Chaser, told The Guardian: ‘If we can prove this treatment works and prevents people who are exposed to the virus going on to develop Covid-19, it would be an exciting addition to the arsenal of weapons being developed to fight this dreadful virus.’

Almost three weeks after Britain became the first country in the world to offer the Pfizer Covid-19 vaccine in a mass inoculation programme, Europe has finally started to roll out doses of the drug.

The first shipments of the Pfizer/BioNTech vaccine have been despatched from a manufacturing centre in Belgium, allowing most health authorities to begin delivering jabs to the most vulnerable across the continent from today.

But Germany and Hungary stole a march on their EU neighbours when they began vaccinating their citizens yesterday, a day before Eurocrats had planned to start a co-ordinated continental roll-out.

With at least 600,000 Britons already inoculated against Covid-19 since Margaret Keenan was given the jab on December 8, Europe’s vulnerable groups have had to wait for experts at the European Medicines Agency to give formal approval.

The European vaccination effort had been scheduled to start at a care home for the elderly in the Spanish city of Guadalajara, north-east of Madrid.

Instead, Hungarian doctors and healthcare workers yesterday became the first Europeans to receive the Covid-19 vaccine and administered jabs to elderly residents at a nursing home in the German town of Halberstadt.

The roll-out, however delayed, gives hope to some of the world’s worst-hit countries. At least 16 million cases of coronavirus have been reported across the EU, with more than 360,000 deaths.

Concerns are growing that some older and vulnerable people are not taking up the Pfizer vaccine.

At one health centre in South London, The Mail on Sunday has learned that 75 doses of the vaccine were left over as uptake had been so low. Managers were left scrambling to find other patients to vaccinate and even offered a jab to healthy volunteers working there.

The Pfizer vaccine must be used within five days of being thawed or it offers no protection. Experts suggested that elderly people may be struggling with transport or are nervous about venturing outdoors. Caroline Abrahams at Age UK, said: ‘Simply getting to and from hospital is a huge challenge for a lot of older people.’

But an NHS spokesman insisted: ‘Uptake has been strong so far.’

The fears follow reports that care home residents have yet to receive the vaccine in large numbers despite being classed as high priority. The Times reported Whitehall figures which suggested people in care only accounted for 0.3 per cent of the first 613,000 people who have received the jab.