Female protesters confront police as 100,000 people take to the streets of Belarus in latest demo against re-elected President

Thousands of Belarusians calling for the President Alexander Lukashenko to resign marched through Kyiv as the country´s wave of protests entered its seventh week.

Protests also took place in several other cities, including Brest and Grodno.

The crowd in Minsk included about 100,000 people and dozens of demonstrators were arrested in Minsk and Grodno said Ales Bialiatski, head of the Viasna human rights organization. 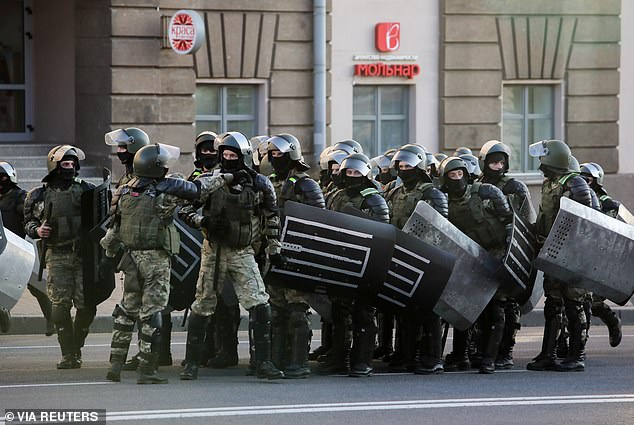 Hundreds of soldiers blocked off the center of Minsk 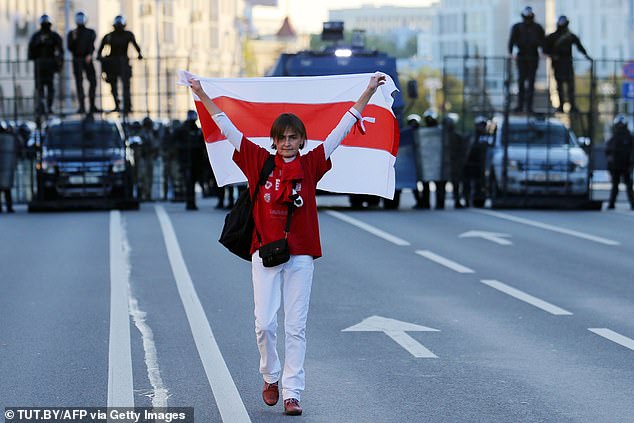 Protests began after President Alexander Lukashenko’s victory in the August 9 poll ;opponents and some poll workers say the results were manipulated.

Lukashenko, who has repressed opposition and independent news media during 26 years in power, has rejected suggestions of dialogue with the protesters. Many members of the Coordination Council that was formed by the opposition to push for a transition of power have been arrested or have fled the country.

The Minsk demonstrators carried the red-and-white flags that were independent Belarus’ national standard before being replaced in 1995, early in Lukashenko’s tenure. Some bore placards depicting Lukashenko as a mustachioed cockroach.

Although protests have taken place daily since the election, the Sunday gatherings in Minsk have been by far the largest, attracting crowds of as many as 200,000 people. 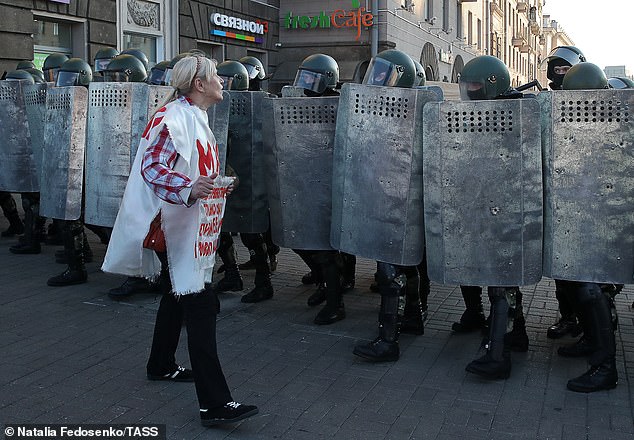 Belarusians are protesting against the re-elected President Alexander Lukashenko 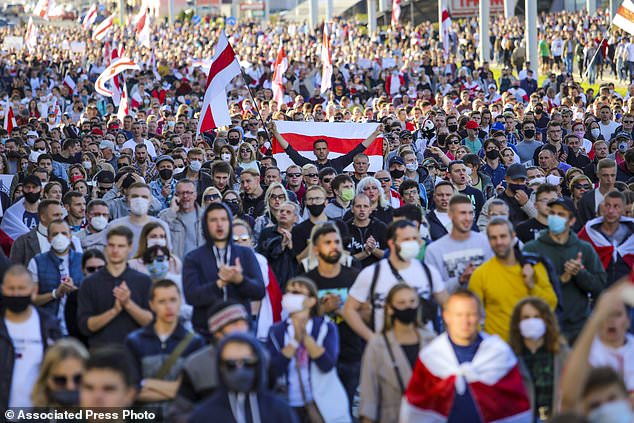 Dozens of protesters were arrested in Minsk and Grodno

‘Every Sunday, you are showing yourselves and the world that the Belarusian people are the power,’ Sviatlana Tsikhanouskaya, who was Lukashenko’s main election opponent, said in a video message from Lithuania, where she is in exile.

The marchers also carried portraits of Maria Kolsenikova, a top opposition figure who has been jailed for two weeks and is facing charges of undermining state security that could bring a five-year prison term. Kolesnikova has said security forces drove her to the border with Ukraine to try to make her leave the country, but that she tore up her passport so she couldn’t cross the border.

In a statement relayed by her lawyer on Sunday, Kolsenikova urged protesters to continue.

‘Freedom is worth fighting for. Do not be afraid to be free,’ she said. ‘I do not regret anything and would do the same again.’

Also Sunday, Interior Ministry spokeswoman Olga Chemodanova said an investigation has been opened into the release by hackers of the personal information of more than 1,000 employees of the ministry, which runs the police forces.