Historical treasures like miner’s pants that could have been made by Levi Strauss, mysterious daguerreotypes and gold jewelry from the U.S.S. Central America – a ship laden with gold that sunk in 1857 – went on display for the first time.

The ‘accidental time capsule’ from the Gold Rush Era sidewheel steamship was recovered by a rogue captain and a salvage company between the 1980s and 2014. Many of the treasures, however, have been hidden away due to years of litigation with insurance companies over who held rightful claim.

The 280-foot ship was traveling from Panama to New York by way of Havana, Cuba carrying nine tons of gold.

The ‘Ship of Gold’ the U.S.S. Central America went down with nine tons of gold and 425 passengers in 1857 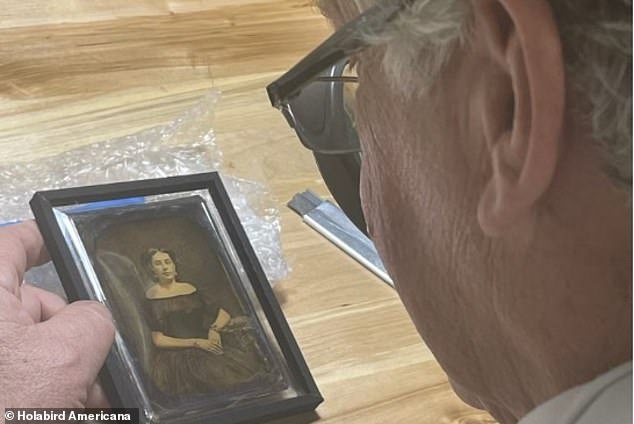 The ‘Mona Lisa of the Deep’ daguerreotype recovered from the wreck of the U.S.S. Central America was on display in Reno, Nevada

Several daguerreotypes were found on the ship. Daguerreotypes are photographs taken by an early photographic process employing an iodine-sensitized silvered plate and mercury vapor 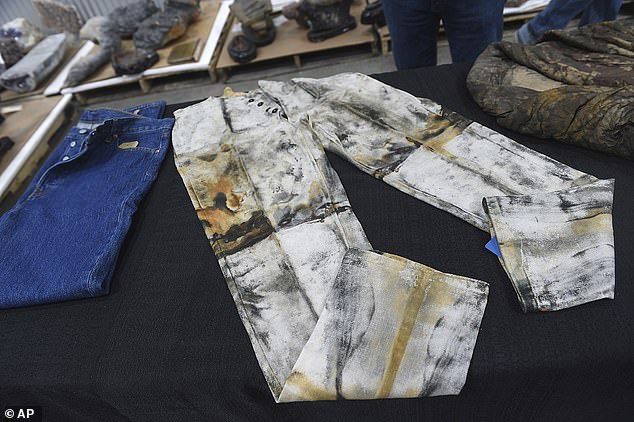 A pair of work pants, possibly an early rendition of jeans made by Levi Strauss were hidden underwater for over a hundred years until their discovery in 1988

A pair of miner’s pants, button fly with riveted pockets, could have been among the first jeans fashioned by Levi Strauss 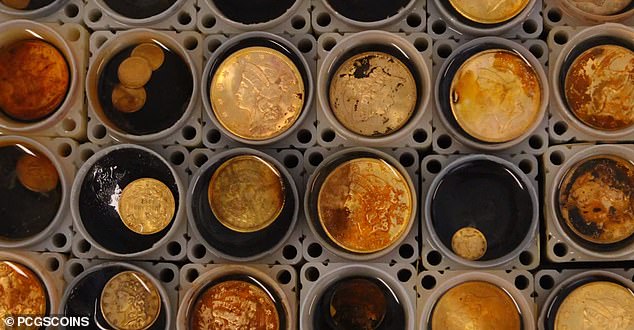 The U.S.S. Panama was laden with nine tons of gold which sunk in the Atlantic off the coast of South Carolina during a hurricane in September 1857

The ship also carried 578 passengers and crew, 425 of which perished in the Sept. 12, 1857 wreck off the cost of South Carolina in a Category 2 hurricane. Only 153 passengers, mostly women and children, survived.

Their belongings create a rare historic picture of American life just before the Civil War.

These rare historical items were on display for the first time last week since their discovery at the National Antique Bottle Convention in Reno. 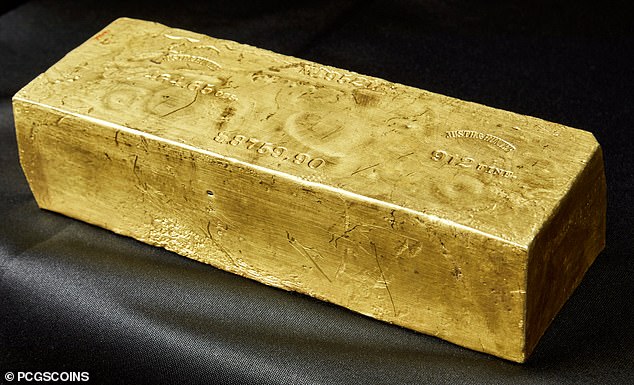 This gold brick salvaged from the wreckage of the U.S.S. Central America is worth more than a $1 million alone 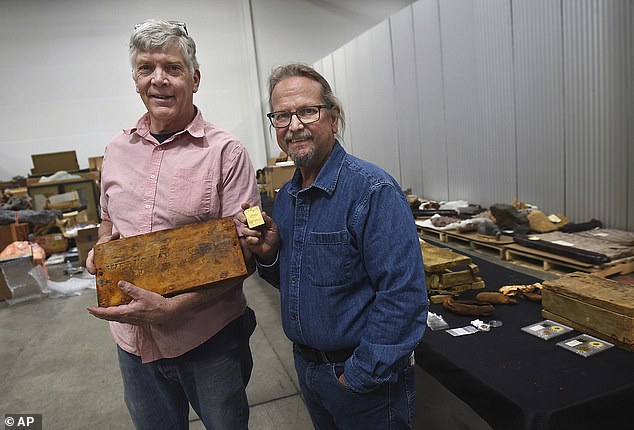 Fred Holabird, left, and Bob Evans, right, pose for a portrait with artifacts found on the ship 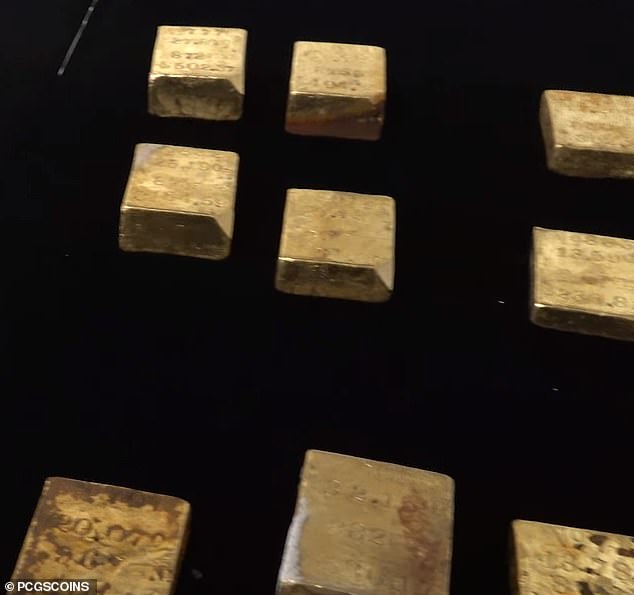 Gold ingots, some of the first gold currency out of the Gold Rush were recovered from the wreckage 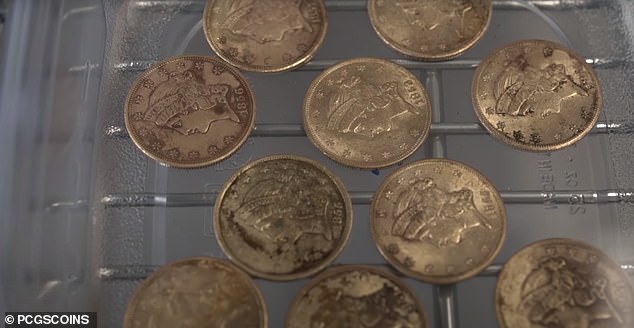 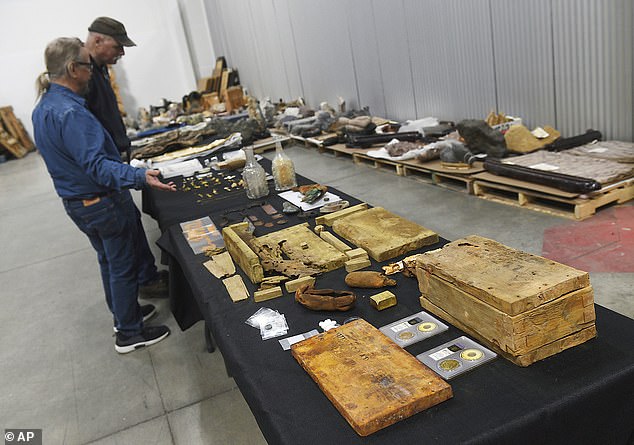 Hundreds of historic artifacts from the the U.SS. Central America were on display in Reno. They created an accidental time capsule of Gold Rush Era America

‘There were people from all over the country who had traveled to California and now we’re going home with their wealth,’ he told the paper.

A pair of canvas sailcloth pants with a button fly, which were found in a trunk that once belonged to Lieutenant Dement, a veteran of the Mexican American War and passenger on the ship.

Evans said that the pants could have been the original work of Levi Strauss, who went to San Francisco in 1853 to make his fortune in the Gold Rush. He didn’t paten his button-fly jeans until 1873, but they took off to become America’s most iconic brand of jeans. The pants found in the shipwreck, have the same riveted pockets that are still found on Levi’s today.

425 people died in the shipwreck. Only 153 passengers, mostly women and children survived. In addition to the huge loss of life, the loss of $8 million worth of gold contributed to the financial Panic of 1857

The SS Central America was in operation for four years during the California gold rush before it sank after sailing directly into a hurricane in September 1857 in one of the worst maritime disasters in American history.

The 280-foot sidewheel steamer set sail from Panama on September 3, headed to New York City by way of Havana Cuba.

A Category 2 hurricane shredded her sails off the coast of South Carolina. She took on water because of the heavy seas and foundered.

There were 578 men, women and children on the boat and 425 of those passengers and crew were killed on September 12 in the storm.

An estimated 9 tons of gold sank with it to the bottom of the ocean.

In 1988, the ship was discovered by Capt. Tommy Thompson. He excavated the wreckage until 2012, when he was sued by investors for absconding with some of the treasure.

He went into hiding until 2015, when he was located by U.S. Marshals.

He refused to tell a judge where $2.5 million of the gold is.

Thompson remains in jail, racking up fines for contempt of court.

The treasure has been kept in three different locations, Ohio, Maryland and Massachusetts while a 10-year legal battle was waged over rights to the loot.

Strauss himself had a shipment of gold being carried on the Central America.

A Brooks Brothers smoking jacket and undershirt were also found in the wreckage.

Several daguerreotype photographs were also on display at the convention, including the ‘Mona Lisa of the Deep’ a woman with an off-the-shoulder lace dress and corkscrew curls. The mystery woman, who has not been identified, flashes a wry smile, giving her her nickname.

The exhibit also boasted glass bottles for whiskey and wine, some still bound in their protective wicker cozies. The wine room key, along with its brass tag, were found in a safe. A holster for a large pistol, brass powder flasks, a powder horn and other firearm paraphernalia that were found on the wreck were also on display.

The sinking of the U.S.S. Central America was considered a great human and financial tragedy at the time.

The gold was worth $8 million at the time and its loss contributed to the financial Panic of 1857, which crippled the American economy.

The artifacts in the exhibit were kept in storage in three different states: Maryland, Massachusetts, and Ohio, until a court-approved settlement was reached ending a decades-long ownership dispute, according to the Associated Press.

When it was discovered in 1988 by a salvage team lead by Capt. Tommy Thompson, it was called ‘America’s greatest treasure,’ however greed, intrigue and legal wrangling marred the find.

A group of Ohio investors who paid $12 million to fund the expedition said that they were cheated out of the returns and workers on the salvage ship, who were forced to sign a confidentiality agreement to keep the project secret, said they were stiffed as well.

Thompson was described as a secretive Howard Hughes-like figure by an attorney on one of the cases. He was accused of making off with $2.5 million in gold coins. 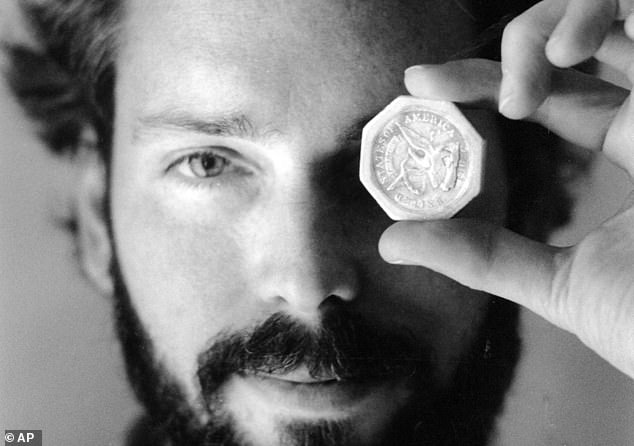 Tommy Thompson, who discovered the wreckage, is pictured holding a $50 pioneer gold piece retrieved in 1989 from the Central America. The former deep-sea treasure hunter is refused to disclose the whereabouts of 500 missing gold coins

Thompson told the judge that the gold was held in a trust in Belize, but he would not provide any details.

He went underground in 2012 after a judge ordered him to disclose the whereabouts of $2.5 million in gold coins.

U.S. Marshals caught up to him in 2015 in a Jacksonville, Florida gas station carrying nine different identification cards, most of them fake.

He still refused to reveal the true location of the gold and remains in federal prison today, with a daily $1000 contempt fine until he discloses the treasure’s whereabouts.

In the meantime,  a Ohio judge allowed Florida-based Odyssey Marine Exploration to continue Thompson’s work in recovering the gold and historic artifacts from the site.

The bottles, pants and daguerreotypes will be sold in public auctions in October and November by Holabird Western Americana Collections.

The plunder is owned by a group of investors under the California Gold Marketing Group umbrella. Major league sports agent, Dwight Manley, who once repped Dennis Rodman, is the president of the organization.

Many gold coins were found in the wreckage. Thompson is accused of making off with $2.5 million worth of the historical currency 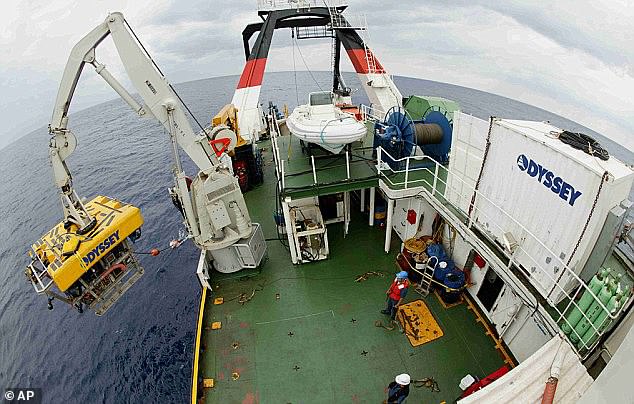 This 2003 photo shows the eight-ton remotely operated vehicle that was used to search the ocean floor about 100 miles off the coast of Georgia, where gold bars and coins from the wreck of the SS Central America were recovered